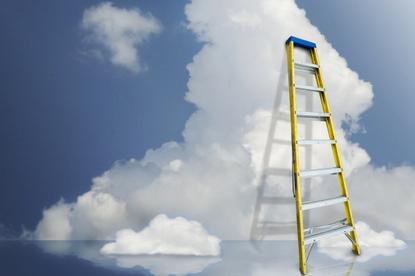 There is no shortage of criticism about the cloud, about its lack of interoperability, fear of vendor lock-in as well as the security risks.

Its critics include Vinton Cerf , a father of the Internet and Google's chief Internet evangelist, who compares the status of cloud computing today to the early days of email.

"Today, cloud computing is like the email of the 1980s, [when] things were not interconnected, you couldn't interchange things between email (systems). {Now] you can't interchange things between clouds - that is going to change," said Cerf, at the Interop conference this week. "There will be the same pressures to get cloud systems to interoperate."

Mark Deibert, who is responsible for global enterprise architecture at a pharmaceutical firm that he asked not be identified, agreed with Cerf.

Deibert said his firm is creating a private cloud as a proof of concept. "It gives us a chance to get our feet wet in a measured way," he said.

But how will the market force cloud providers to interoperate?

The alliance was formed late last year and its membership has since doubled to more than 150 firms, representing, in total, about $85 billion in annual IT spending, according to Kirk Skaugen, a vice president at Intel and general manager of its data center group.

Intel helped to create the alliance, but Skaugen says the chip maker serves in an advisory, non-voting, role. The roadmaps and recommendations that come out of this group will be software and hardware agonistic, he said.

The alliance isn't creating standards, but what it will do is work with existing standards organizations, such as Distributed Management Task Force, to help develop them, said Skaugen.

Some of the alliance members are contributing senior IT staff to help create a roadmap, said Skaugen.

What Intel appears to gain by its close working relationship with the alliance is an understanding of user needs.

Intel has also created a Cloud Builders program for vendors, who are working with Intel to ensure their products meet emerging technology requirements. The vendors are "trying to do it in parallel" what will emerges from the alliance, said Skaugen.

The role of chip technology will be through things such as Intel's Trusted Execution Technology, a hardware-based security feature to ensure code is executing in a protected environment.

A goal of the alliance will be to ensure that clouds can interoperate.

"We want to make sure that data can be protected both at rest and in flight - whether you are moving from a private cloud to a public cloud or between public clouds," said Skaugen, as well as being "independent of which vendor is the underlying infrastructure within those clouds," he said.

Patrick Thibodeau covers SaaS and enterprise applications, outsourcing, government IT policies, data centers and IT workforce issues for Computerworld. Follow Patrick on Twitter at @DCgov , or subscribe to Patrick's RSS feed . His e-mail address is pthibodeau@computerworld.com .