Cloud computing and governance in the digital age - Part 3 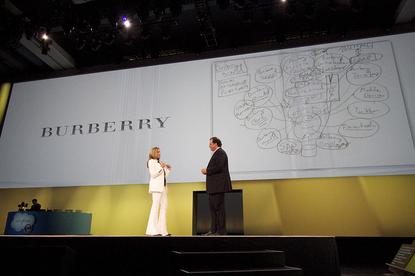 During the Saleforce.com Dreamforce event in San Francisco, CEO Marc Benioff sat down with some of the leaders in the industry to talk about Cloud computing and governance in the digital age. The panel included former US federal government chief information officer, Vivek Kundra, the vice-president of the European Commission responsible for the Digital Agenda, Neelie Kroes, and Burberry chief executive officer, Angela Ahrendts.

The four leaders discussed various issues during the course of the wide ranging conversation, including best practice for Cloud computing by governments and the importance of human rights. In part 3 of this series, CIO Australia brings you an extract of the conversation between Benioff and Ahrendts.

Marc Benioff: Angela, you’re in one of the most dynamic fields in the world [and] you run a huge global company. Burberry has to think about these issues — the rights of your customers, of your employees, the transparency and the trust that you provide. How do you think about the global enterprise and the move to the social enterprise in regards to governments today?

Angela Ahrendts: I’m going to pull a quote, Mark, out of your brilliant book that I read over the holidays… And probably my favourite quote in the book — you said that most successful CEOs today are not living by profit, but also by purpose.

It’s one of the core values of our company… and I think it puts the onus back on every one of us; I think you are going to see a massive shift and I don’t think that governments will have the resources. The onus will be on the businesses, and if businesses are creating a social enterprise, you are not a business in a community anymore, you are the community.

Benioff: You’re based in the UK, your office is in London, you’re everywhere in the world. What relationships do you want with all of those local governments? …Do you want the ability for data to easily flow between borders so that your stores in Hong Kong can easily use the same application as your stores in New York or in Munich?

Ahrendts: It’s a great question. And I think also that you have to build trust. Burberry is not a huge company; Burberry is about $2.5 billion, market cap about $10 million. I was just in China last month, and I met with the Mayor of Beijing, and I met with the Mayor of Shanghai — and we are relatively small in relationship to a lot of organisations that they’re doing business with. But I want to look them in the eyes; I want them to trust Burberry. I want them to trust the company. We need them, and I need to understand how they feel about these things. Only then can we stay ahead of the curve and craft our vision around it.

Then you can talk openly and you can help influence… if they trust you and they see you’re success rate, you can influence the policies that may they’ll put in place. That’s what we’re trying to do around the world — maybe on a different level — in terms of communicating. And we have a very wonderful added benefit that our Chairman also happens to be the chairman of Standard Chartered Bank … so we get tremendous counsel from him that only guides us further. But the onus is on business, the onus is on CEOs to set the policy, not just to allow it to lead them to us.

Benioff: So it’s the tone from the top. And that is the beginning of where the trust starts, right? Because that is very much what the issues were in Arab Spring. It was a tone from the top issue and the way that those leaders handled the protests was incongruent — their values were incongruent with their constituents. And that is what created that problem — the inability to shift and change.

I think we’re going to see a corporate spring. We will have the same issues for companies, whether it be with customers or their employees. And CEOs who love a ‘command and control’ position as much as, you know, a third world dictator does — I think in many cases, just doesn’t fly. It is much more of a society and a community and… much more of country than ever before. We’re seeing the beginning of that and that this emergence of the culture of the technology is really key.

Georgina Swan travelled to Dreamforce as a guest of Salesforce.com