Could Google's Chromecast find a place in the enterprise?

Is it a great $35 mobile beaming gadget or yet another headache for IT shops? 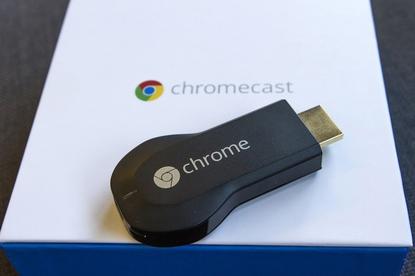 Google's $35 Chromecast dongle for beaming video and music to HD TVs from smartphones, tablets and laptops appears to be a clear hit for use in America's living rooms. The dongle was already in short supply a day after it was announced.

Aside from its consumer appeal, however, might Chromecast also have value for business uses inside enterprises? Or, at least, could it catch on with tech-savvy individual sales personnel or BYOD-friendly executives who might need a mobile gadget to project a slide show or video presentation to a larger HD monitor while on a client visit?

The 2-in. Chromecast device would be easy enough to carry along on a business trip: Just open a Chrome browser to a tab with a sales presentation or other document on just about any fast laptop running Mac or Windows. Then, plug the Chromecast dongle into the HDMI port of an HD display, and plug in power from the USB-ready cord provided with Chromecast. A Wi-Fi connection is also needed.

With its initial release, Chromecast supports streaming content from Netflix, YouTube, Google Play Movies and Google Play Music from an iOS or Android device. Also, now in beta, users with a fast laptop running Windows, Mac or Chrome OS with the Chrome browser can use the Chromecast to show content inside of a Chrome tab to the HD display. Google also seems on course in future rollouts to make the content in a Chrome browser tab stream to an HD display from any Android or iOS device as well.

An early review by Computerworld's JR Raphael found that Chromecast beaming of Chrome tab content from a Chromebook laptop and a Windows desktop computer "worked brilliantly" although with a slight delay, even in beta. (Note: The user also has to install Google Cast Chrome extension on the laptop or desktop, which is available for free in the Chrome Web Store.)

The idea of an executive streaming a full-featured audio and video financial presentation or product roadmap to a big HD display with Chromecast sounds in theory like the ultimate mobile worker cool tool, several analysts said. However, it's just too soon to say whether Chromecast could catch on in common practice with workers, at least in any widespread way.

Chromecast for workers "will have limited appeal," predicted Jack Gold, an analyst at J. Gold Associates. One shortcoming is that the Chrome browser is not widely deployed in enterprises, he said. Many workers are already using iPads for sales presentations, Gold said. While the iPad supports the Chrome browser, streaming content from a Chrome tab on an iOS or Android device still remains in the future.

Also, enterprise IT shops would rather not hand out Chromecast dongles or encourage deployment of another new browser, Chrome, in addition to other browsers widely in use. "Even though the Chromecast $35 price is very attractive, I think ultimately most enterprises would rather provide a standards-based, built-in system capability, rather than try to deploy a new browser and provide people with dongles," Gold said.

Chromecast for workers will "take root, especially in smaller companies and nimble startups, [but] will be slow to gain traction in established enterprises," added Charles Golvin, an analyst at Forrester Research. Eventually, it will catch on in enterprises, "but that change in behavior will happen slowly."

A big reason, Golvin said, is that road warrior behavior is already so ingrained that enterprise presentations are expected to be done with traditional projectors, many in high-end audio-visual presentation facilities. "You bring your laptop, plug in the VGA or HDMI cable, and project the presentation," he said.

Also, most presentations today are done in Microsoft PowerPoint, Golvin added. To beam such a presentation with Chromecast would require one of two things: Microsoft would have to natively support Chromecast, which is "not gonna happen." Or, the presentation would have to be beamed via Chrome, which would require using Google Docs or Office Web Apps. Google Docs doesn't always render with the same level of fidelity as a PowerPoint, Golvin said.

Even with Office Web Apps, "users would need to shift their behavior," Golvin said. Instead, he added, "I expect many people would simply prefer to physically plug in their laptop and use their native app."

Gold said there are several technical initiatives under way to ultimately create a single wireless streaming standard using Wi-Fi. Apparently Google wasn't willing to wait for such a standard in the face of growing competition, mainly from Apple, which has already sold 13 million Apple TVs for $99 apiece. Apple TV is a standalone product that doesn't require a phone, tablet or Chrome browser, and its sales made up 56% of the video-streaming device market in 2012, according to Frost & Sullivan.

The fact that Chromecast is a standalone product could be quite appealing to some road warriors, since the dongle is small, mostly cordless (aside from the power connection) and wouldn't require a location being visited on a business trip to have Apple TV running to allow streaming of content.

In a word, Chromecast is arguably more mobile than other options, analysts said, but it still could take time to catch on in the work place.