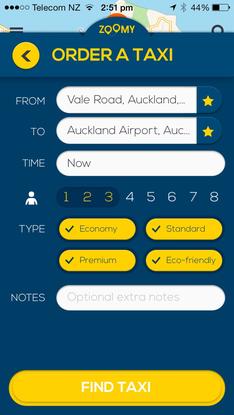 Zoomy, a free smartphone app, will be launched for consumers in Auckland, Wellington and Christchurch this week, and will enable them to order a taxi through their mobile phones.

The app links to taxi drivers and alerts the nearest ones when an order is placed. Once a driver accepts the job, consumers can track the taxi on the map attached with the app. Passengers can record their ratings of drivers, and these will be communicated to other consumers, along with information on the name of the driver and the car licence plates.

Zoomy co-founders, James Fisk and Neil Macdonald, have a background in telecommunications, have spent the past year developing Zoomy and are backed by a team of entrepreneurial investors.

“We have an incredibly strong team, two of whom were involved in the launch of one of New Zealand’s most successful online companies, GrabOne,” said Fisk.

Zoomy has partnered with a number of approved taxi organisations including Corporate Cabs and Green Cabs (nationwide), Budget Taxis and Goldline in Auckland, Goldband and First Direct in Christchurch, and Hutt and City, Harbour City Taxis, and Capital Taxis in Wellington – and will be adding more to their portfolio in the future.

According to the developers, the app, which is available for iPhone and Android smartphones, will incorporate a smart payment option for passengers by the end of November as well.