The FWDLive conference brought business owners and ICT decision makers across organisational divisions to discuss how new advances in technology can benefit all of them. 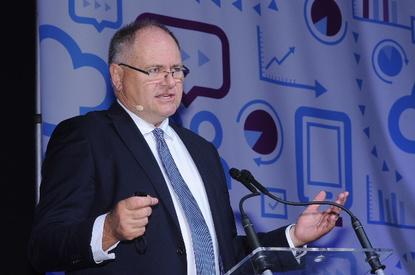 "Gen-i will become Spark Digital in August, in co-relation to Telecom becoming Spark," said Tim Miles, CEO of Gen-i. He was speaking at the company's FWDLive conference that took place in Auckland today.

According to Miles, the change of name is reflective of the company's overall move to hone itself for the digital future and enable its customers to tackle the challenges of increased digitisation that they are 'grappling with.'

"Telecom and Gen-i are investing heavily in the future. And we are changing internally even as we move forward, so much so that change has become the new norm for the firm," said Miles.

He referred to the WiFi hotspot rollouts in New Zealand and the Takanini data centre that is set to go live in October as points of differentiation and examples of the firm's commitment to enabling the country's businesses in a transformative period.

"We are the foremost telecom provider in the country. And we bring to bear extensive technology expertise. There are others in the market who are either telecom providers or IT providers. We bring together both skillsets, almost as a perfect half-to-half," said Miles.

He was followed on stage by Geraldine McBride, CEO and founder of MyWave and former president of SAP North America. She delivered a keynote address that focused on the need for businesses to look at new ways of value creation in order to keep customers interested and keep growing even in tight economies.

"It is not about big data, it is about what I call living data. It is also about sharing data back with the customers and allowing them to choose what they want to share for specific value that they receive in return.

"In the future it will also be about using data to enable co-creation," said McBride.

The FWDLive conference brought business owners and ICT decision makers across organisational divisions to discuss how new advances in technology can benefit all of them. Speakers at the one-day event spoke on everything from the internet of everything to the demands of new-age consumers.

The conference was conducted by Gen-i in association with its key partners, including Cisco and Microsoft.