The company's revenue and profit were down again, but less than Cisco had forecast 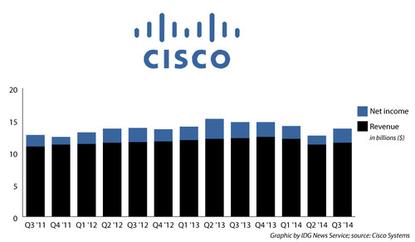 Cisco posted lower sales and profit in the third quarter but beat its own forecast, signaling that the company is continuing to work against economic and industry challenges following two earlier weak performances.

The dominant networking company posted revenue of $US11.5 billion for the quarter ended April 26, down 5.5 per cent from a year earlier. It had predicted revenue would fall by at least 6 per cent.

Net income fell by 3.2 per cent to $US2.6 billion, with earnings per share dropping to $US0.42. Not including one-time items, Cisco posted earnings of $0.51 per share. That result beat the consensus forecast of analysts surveyed by Thomson Reuters.

For the fourth quarter, the company expects its revenue shortfall to ease, with revenue down by between 1 per cent and 3 per cent.

Sales to US enterprises were a strong point in the quarter, Chairman and CEO John Chambers said on a conference call. However, sales in developing countries continue to be weak and Cisco expects challenges in those countries to continue, Chambers said.