The feature will give customers 'ungodly' speed improvements, according to Ellison 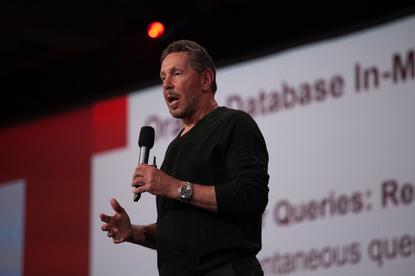 Oracle could be gearing up to make an anticipated in-memory computing option for its flagship 12c database generally available after hyping it for the better part of a year, judging from an upcoming appearance by CEO Larry Ellison.On June 10, Ellison will host a webcast titled "The Future of the Database Begins Soon," which will focus on the in-memory option. "It will be possible to perform TRUE real-time, ad-hoc, analytic queries on your organization's business data as it exists at that moment and receive the results immediately," the notice for the webcast states. "Imagine your sales team being able to know the total sales they have made as of right now -- not last week, or even last night, but right now."That focus on business scenarios is a shift from some of the messaging Ellison used when discussing the in-memory option at the OpenWorld conference in September. There, he primarily talked up the "ungodly" performance gains the in-memory technology will provide to existing applications built on Oracle's database."Flip a switch and all of your applications run much, much faster," he said at the time. "Every application you wrote, every application you bought, runs without a single change."The in-memory option will speed up both analytic and transaction processing workloads, Oracle has said.In-memory databases place information in RAM, rather than reading it off of slower disk storage, providing those performance gains.Oracle has had in-memory technology for years, such as TimesTen, but hasn't made the approach a central part of its database strategy until now.

During Oracle's third-quarter earnings call in March, Ellison said the in-memory option could be launched as late as August, but the webcast's timing could indicate the company's development teams are ahead of schedule.

"We encourage you to attend the June 10 event for specifics of the announcement," an Oracle spokeswoman said when asked whether Ellison will announce the general availability of the product.

The in-memory option will give Oracle a primary weapon to fend off defections to SAP's Hana in-memory database. Many SAP customers run the vendor's Business Suite software on Oracle; SAP has ported the Suite to run on Hana and is encouraging customers to make the switch.It will also help Oracle keep pace with Microsoft, Teradata, IBM and a number of smaller companies that are also pushing in-memory database technologies.In addition, the in-memory option could help drive uptake of 12c from customers still running earlier database versions, such as 11g Release 2.Hundreds of customers have been testing the feature, Ellison said during the third-quarter earnings call. Typically, most Oracle database customers wait until the second major release of a product cycle to upgrade, preferring to let early adopters deal with any lingering bugs. But between the in-memory option and a previously released multitenancy feature, "we think 12c will be the most rapidly adopted feature in many years," Ellison said on the call.