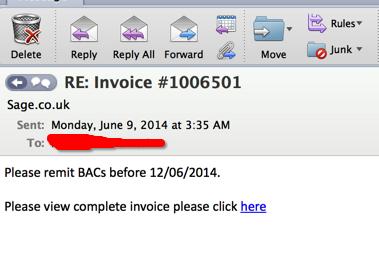 A powerful new type of banking malware called Dyre or Dyreza is being distributed through spam messages containing malicious links to a supposed invoice.

Security researchers said they've spotted a new type of banking malware that rivals the capabilities of the infamous Zeus malware.

The malware, which is being called "Dyreza" or "Dyre," uses a man-in-the-middle attack that lets the hackers intercept unencrypted web traffic while users mistakenly think they have a secure connection with their online banking site.

Although Dyreza has similarities with Zeus, "we believe this is a new banker trojan family and not yet another offspring from the Zeus source code," according to a writeup by CSIS, a Danish security company.

Dyreza uses a technique called "browser hooking" to view unencrypted web traffic, which involves compromising a computer, capturing unencrypted traffic and then stepping in when a user tries to make a secure SSL (Secure Sockets Layer) connection with a website.

During an attack by Dyreza, a user thinks their authentication credentials are going to a legitimate bank, but the malware actually redirects the traffic to their own servers, wrote Ronnie Tokazowski, a senior researcher at PhishMe, another security company that has studied the attack. Users mistakenly think they have connected over SSL to their bank's server.

Dyreza is programmed to intercept credentials when a person navigates to the websites of Bank of America, NatWest, Citibank, RBS and Ulsterbank, wrote Peter Kruse, who is head of CSIS's eCrime Unit and CTO for CSIS's Security Group.

The malware is being distributed through spam messages, some of which supposedly contain an invoice as a ".zip" file. To help evade URL scanners that might block messages with known suspicious domains, the attackers have been hosting the malware on legitimate domains.

One of the services that has been abused is LogMeIn's "cubby.com," which is a file storage service, Tokazowski wrote. Dropbox had been used in the past, but Tokazowski wrote that the service moves quickly to block phishing links. Using trusted domains from legitimate services can help extend the life of a malicious link.

It appears the attackers have also set up other infrastructure to facilitate the transfer of money from victims' accounts. Kruse wrote that CSIS managed to locate some of the command-and-control servers for Dyreza, uncovering a customized money mule panel with accounts in Riga, Latvia. Money mules are people who agree to briefly hold stolen funds in their own accounts before forwarding the funds elsewhere.

Kruse wrote it was unclear if the people who wrote Dyreza are holding it close and using it for themselves or are renting it out to other criminal outfits, as was done with Zeus.