The sandwich chain will roll out contactless payments at 26,000 restaurants 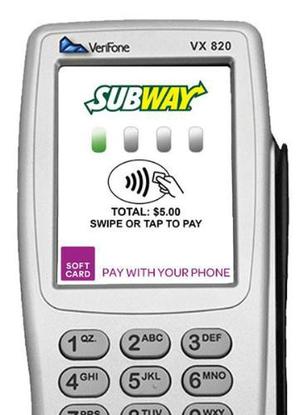 Subway will accept NFC payments with Softcard from October 1, 2014.

Subway will soon allow customers to pay for their sandwiches with the tap of a smartphone.

The sandwich franchise chain said Tuesday it will launch contactless NFC payments across more than 26,000 restaurants in the U.S. starting Oct. 1.

The company is working with Softcard, a mobile payments joint venture operated by the big four cellular networks, to launch the system, but a Subway spokeswoman said that any payment app based on the NFC standard will be accepted. That includes the soon-to-be-launched Apple Pay and existing services from Google Wallet, PayPal and other vendors.

The rollout will be one of the largest in the U.S. to date. When Apple CEO Tim Cook announced Apple Pay last week, he said there were 220,000 stores across the country that would accept the system. The Subway announce increases that by more than 10 percent in a single step.

Subway has been testing NFC payments with Softcard in Salt Lake City since earlier this year.

Softcard is operated by AT&T, T-Mobile, Sprint and Verizon. Until recently, it was called "Isis" but rebranded to avoid being confused with the terrorist group that is also called Islamic State.