Alcatel-Lucent and JCDecaux have joined forces on small cells 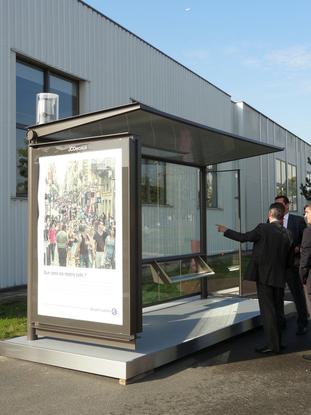 Alcatel-Lucent and JC Decaux are working together to integrate wireless connectivity with street furniture such as this bus shelter shown at Alcatel Lucent's Bell Labs Future X Days exhibition near Paris on Sept. 30, 2014.

Operators need help, because installing the miniature base stations is far from trivial. Obstacles include finding appropriate sites, obtaining zoning or construction permits and integrating them to the rest of the LTE or 3G network. Alcatel-Lucent's program speeds up the process of finding suitable places for the hardware, according to the company.

JCDecaux brings 434,700 advertising panels to the initiative. A large majority of those are located in Europe, but the company also has about 14,000 panels in North America and 35,000 in the Asia-Pacific region, according to the company's website.

The companies want to make sure that small cells are added in a way that doesn't create too much more clutter in cities and that makes good use of existing power resources, Alcatel-Lucent said. The installation of mobile base stations of all sizes has always been a sensitive matter, but Alcatel-Lucent and JCDecaux are hoping small and inconspicuous equipment will cause less of a fuss.

The joint products will be available anywhere JCDecaux has operations and where service providers want to deploy Alcatel-Lucent's small cells, an Alcatel-Lucent spokesman said via email.