Boost for 10,000 Kiwis as Kids Code Club launches in NZ

“We want every child in New Zealand to have the opportunity to code..." 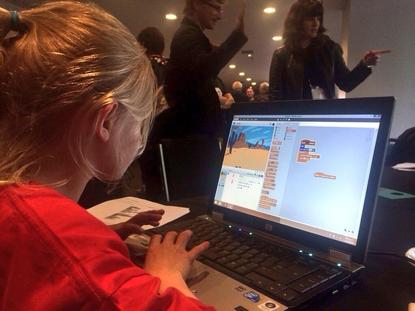 With an ambitious mission to give every Kiwi kid the chance to learn to code, Code Club Aotearoa has launched its nationwide programme of free volunteer-led classes to encourage New Zealand children to become tomorrow’s creators and innovators.

An initiative that started with one club in the United Kingdom, within a 24 month period Code Club soared to 2,500 volunteer led clubs teaching close to 30 000 students to code per week.

Revealed today, New Zealand is now one of the countries across the globe setting up Code Clubs to encourage children to combine their imaginations with an understanding of programming to take their incredible inventions to the world.

Code Club Aotearoa president, Michael Trengrove says classes are all free for students led by volunteers with a grounding in programming partnering with teachers from local primary and intermediate schools.

Trengrove says Code Club helps volunteers and schools find each other and creates projects for volunteers to teach at club sessions.

“Since starting the first club from a rundown building in Aranui we’re now seeing clubs opening in Auckland, Wellington, Nelson, Dunedin, Cromwell and Christchurch,” he adds.

“Part of my motivation to work on growing Code Club in New Zealand is that I believe we have a once in a life time opportunity to see a step change in what underpins our national economy,” he says.

“Moving from depending on agricultural exports to a digital based economy exporting smart ideas and high-tech solutions.

“With computer science now an academic subject in high schools, and work currently being done to introduce new curriculum into primary schools, I think we will see this generation emerge with a completely different view about what is possible from our corner of the world.”

Trengrove says that technology companies are also key to helping collaborate and spread the learning of code to the younger generation.

“We have IT companies now approaching us wanting to adopt a region in a city and encouraging their staff to get out there and start new clubs,” he adds.

“Large technology employers like Wynyard Group and Orion Health have been instrumental in providing support and the time of their staff to set up and run clubs at their offices.

“This gives students an additional bonus of being able to see what it is like working in a high-tech environment.”