Tech is taking over the world, here's how Kiwi kids can keep up...

As a curious kid, Dr Michelle Dickinson learned about technology by breaking open electronics and trying to understand how they worked. 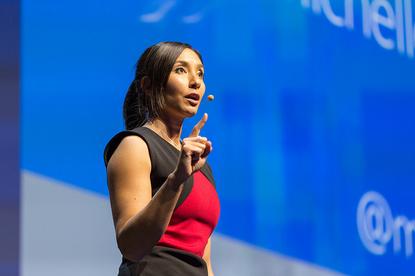 As a curious kid, Dr Michelle Dickinson learned about technology by breaking open electronics and trying to understand how they worked.

Hailing from a normal family, neither rich nor academic, Dickinson didn’t grow up in an environment filled with expensive gadgets and latest technology, instead she learned to solder, code and rewire circuits using “old equipment and a lot of curiosity.”

Fast forward to the present day and Dickinson, a Senior Lecturer at the University of Auckland, has thrown her support behind OMG Tech!, a not-for-profit initiative encouraging young Kiwis to get into the high-tech sector as a career.

With the first event located at The Grid in Auckland this weekend, the day of technology welcomes kids from schools around the city who don't have the means to access computers, 3D printers, robotics kits and the like, as well as the people to facilitate this.

“I wanted to give this chance to other kids, especially those who don’t have access to technology or the equipment required,” adds Dickinson, who was brought on-board by Vaughan Rowsell, the creator of OMG Tech!

“It’s designed to help develop these skills because I think that in a world that is being taken over by technology, it’s important that all of our children know how it works and how to be a involved with it.”

Speaking to Computerworld NZ from her nanomechanical testing laboratory, the only one in New Zealand, Dickinson says the aim of OMG Tech! is simple.

“In the short term we are providing workshops for kids to not only access technology but learn the crucial skills needed to make and design technology,” she explains.

“Our workshops teach essential design tools including coding, and robotics, but also we teach in our breaker space about how to open up technology and see what is inside and how it works.”

Longer term, Dickinson says the event is looking for permanent spaces in Auckland and other New Zealand cities where kids will have access to technology in a space that they feel welcome in.

“Our aim is not to provide a curriculum enforced learning space,” she adds, “but to break down the academic and financial barriers and create a space to learn, create and start conversations with kids that may not have access to technology at home.”

Unfortunately, New Zealand houses many children growing up in poverty without access to the basics.

Dickinson however believes the programme, which not only teaches about technology but also feeds and provides transport for the day, will help Kiwi kids to meet other people outside of their regular social circle.

“It will empower kids to learn from non-intimidating experts and build their confidence in a field that they may know very little about,” she adds.

“I strongly believe that children who do not grow up understanding technology will be left behind in a future world that will be powered by robots and computers and I want OMG Tech! to be one of the ways that these kids don’t get left behind.”

Standing tall as a leading female within the ICT space, Dickinson also speaks of her desire to break down the stereotypes of what tech people look like, painting a different picture to the one commonly associated with the industry.

“We are not all beard wearing white males,” she adds, “but some of us are funky females with personalities who are rocking the tech bubble in our own unique way.”