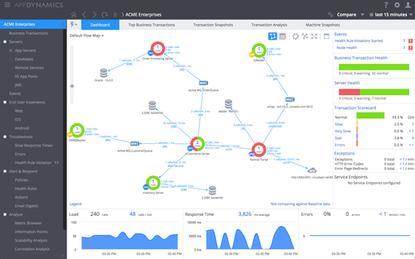 Looking to expand into a new market, AppDynamics has updated its application monitoring software to provide real-time insights that can be useful for business managers as well as IT staff.

The company announced the Fall 2014 Release of its software at its first user conference in Las Vegas this week. The update also adds new collaboration capabilities and enhancements to keep current with the latest Web development technologies.

With APM (application performance monitoring) systems, developers add software agents to their applications that can collect performance and operational data and relay it back to IT administrators, who use it to spot outages, errors and unexpected latencies.

But in the past couple of years, APM companies have realized the data they collect can be useful to business managers as well. The products provide the ability to see "every interaction within the software stack, from the end user through the business logic," Gartner analyst Jonah Kowall said via email.

A new feature in the AppDynamics platform, called Application Analytics, could help business leaders understand which features in a new app are being most heavily used, for instance. The software could also provide a way to calculate the cost of an app outage in terms of lost revenue. And it could highlight underperforming apps, helping managers make better decisions about IT investments.

Getting that type of data requires no additional coding or infrastructure, according to AppDynamics, which competes with companies like New Relic and Dynatrics, a recent spin-off from Compuware.

Using APM instead of a standard data warehouse can be advantageous because users can get data as it's generated, rather than waiting for it to be collected and stored for analysis in a daily batch process, according to AppDynamics

Along with the new analytics capabilities, the Fall 2014 Release adds a feature called the Virtual War Room, which helps teams collaborate by providing a space where they can discuss data that's being collected. It can also automatically e-mail pre-configured reports to multiple recipients.

The release also adds new analysis patterns to help understand how complex applications are behaving. One such tool, called cross-application flow, can examine well how multiple applications, working together on a common task, are interacting. Another pattern can examine the performance of WebSocket connections, a new Web standard for real-time communications.

AppDynamics offers a free "lite" version of its APM product, which can run on-premise or as a hosted service. Use of the "Pro" version starts at US$180 per month.