"We entered the marketplace at a time when the enterprise had barely heard of apps. All that has changed now." 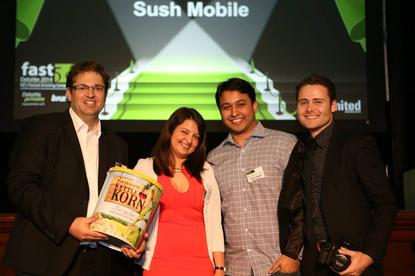 A ranking of the 500 fastest growing technology companies in Asia Pacific, of those listed, Sush Mobile is positioned as one of the fastest growing specialist enterprise mobile software solutions developer in New Zealand and Australia.

“Attracting enough customers to attain such fast growth over three years makes a strong statement about the quality of a company’s product and its leadership,” says Ichiro Nakayama, partner in charge of Deloitte’s Technology Fast 500 Asia Pacific program.

“Sush Mobile has shown the right calibre for growth.”

According to Sush Mobile founders and joint chief executives, Sheenu Chawla and Sulabh Sharma, this ranking is validation of the company’s focus on quality and commitment to delivering the very best experience throughout the customer journey.

“Sush Mobile entered the marketplace at a time when the enterprise had barely heard of apps,” Sharma adds.

“All that has changed now. We’ve witnessed a steady growth in demand and interest from enterprise customers.

“It’s very clear from where we’re standing that more and more companies are exploring what’s possible in mobile.”

Chawla attributes the significant growth to the trending shift to mobile solutions across all industry levels including enterprise, SME, entrepreneurs, NPOs, and government.

“So many businesses in NZ, and Australia for that matter, are keen to get into the mobile space, but simply don’t know where to begin,” Chawla adds.

“Our ranking pays testament to how mobile has matured, providing a valuable platform for businesses around the world.”