Perhaps the best feature? Microsoft says it's solved the pain and friction of simply joining a videoconference. 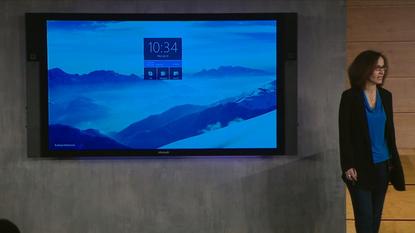 Microsoft has extended the Surface family of hardware devices with the largest darned touch tablet you’ve ever seen.

The company wouldn’t reveal a price or release date, but the wall-mounted monstrosity is loaded to the hilt with all of today’s modern bits and bobs.

There’s Bluetooth, motion detectors, a camera, speakers, a microphone, and Wifi. Directly from the home screen, you can make a videoconference call, start a whiteboarding session, and connect to personal devices like PCs, tablets and phones.

In sum total, it seems to be Microsoft’s bid to erase all the friction we ever experienced with Google Hangouts, other videochat systems, and proprietary white-boarding platforms.

And you know that’s an admirable goal if you’ve ever suffered through the Kalfkaesque absurdity of modern office collaboration.

In a brief demo at its Windows 10 event, Microsoft showed how the OneNote app takes over the Surface Hub’s launch screen.

From there, whoever’s driving the meeting can draw directly on the Hub with digital ink; there appeared to be no drawing lag, as promised on stage. Your annotated images can be shared via OneNote or email, putting an end to the barbaric practice of taking a photo of a whiteboard, and then sending that to attendees. (Come on, you know you’ve done that. We all have.)

But here’s the really cool part, the feature I’m most excited about: Microsoft demoed the most seamless meeting-joining process I’ve ever personally seen during all my years of videoconferencing.

Simply tap once to join a meeting, and you’re in. Now that’s supposed to be how it works in Google Hangouts, and even on Skype in Windows 8—but it never really pans out in the real world, does it? So here’s hoping that Surface Hub will finally figure out what should be the most simple “feature” ever.

Once your attendees have joined your Hub meeting, they can see all your digital ink-driven whiteboarding, and you can see their avatars off to the side.

The conferencing engine is Skype For Business, which is designed to take full advantage of the Hub’s large screen and speakers, Microsoft says.

The gigantic touch device can also quickly pair with PCs, tablets and phones in the room, so you can cast content directly from those devices to the large screen. You can also draw directly on the Hub, and the resulting digital ink will reflect back to the screens of the smaller devices.

Once your brainstorming session is over, Microsoft says Surface Hub will share the entire conferencing session attendees, and reset the hardware for the next meeting.