Ask any IT administrator about Microsoft's licensing setup and they'll hurl up a string of four-letter words that would incur an FCC fine if delivered on television. 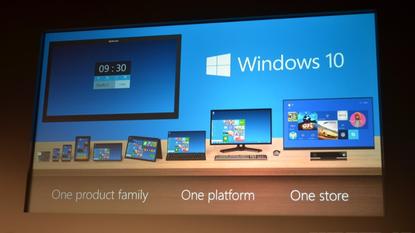 Ask any IT administrator about Microsoft's licensing setup and they'll hurl up a string of four-letter words that would incur an FCC fine if delivered on television.

In a world where everyone wants to use everything -- especially Microsoft Office -- on tablets, phones, and oh yeah, computers, Microsoft's customary one-licence-per-device model means death by a thousand cuts for most enterprises.

That's why it was a big deal in December when Microsoft rolled out the Enterprise Cloud Suite (ECS), an optional add-on to the Microsoft Enterprise Agreement that gives access to Microsoft Office 365; the Enterprise Mobility Suite for mobile management; and, for the first time ever, a per-user (not per-device) licensing model for Windows.

Even at the launch of ECS, Microsoft was vague on details. But the company has now confirmed that the suite costs between US$7 and $12 per user per month and includes a Windows Enterprise Edition licence for any x86 desktop/laptop or Windows tablet (as long as the screen is smaller than 10.1 inches).

It also includes licences to access Windows Enterprise via VDI or through the Windows To Go feature that lets users access a corporate pre-approved image of the OS from a USB drive.

Users not already under an Enterprise Agreement can just buy the cloud features directly for a comparable price.

Office 365 and Enterprise Mobility Management is already a bargain at that $7-$12 (depending on deployment size) per person price: It includes Azure Active Directory for identity management, OneDrive for Business, the MDOP desktop optimisation suite, Intune MDM, Office on all your devices and unlimited VDI licensing.

For comparison, the Business version of Office 365 alone is $8.50, and users don't get Windows or the Service Assurance (SA) that comes with it, which guarantees complementary updates for the duration of the agreement.

According to Microsoft Corporate Vice President Brad Anderson, the aggressive pricing move is designed to force the upstart competition out of relevance: Companies like MobileIron, VMware's AirWatch, Box, Good Technology and others are all building applications that are like  Microsoft Office, designed to provide secure email, secure collaboration, digital rights management and other features.

But those solutions aren't Microsoft Office, and users and administrators alike have struggled to get them all to play nicely together -- even as the CIO's office is paying upwards of $20 per user per month for a cobbled-together solution that causes ongoing headaches for operations, and just don't work the way users expect.

"Organisations are looking for solutions that marry management with productivity with identity," Anderson said.

For Microsoft, that means providing a platform that includes everything for everyone. Samsung is trying the secure identity thing with Samsung Knox, which promises to sequester personal data from personal data.

And Anderson fully expects Apple to follow suit with a similar solution when it's ready. But only Microsoft can bake enterprise controls around who can share what with whom and how into Office itself, where so much work is already getting done, he said.

And now, for considerably more than the cost of a cup of coffee but considerably less than buying each individual piece -- from the operating system to the device management portal to the productivity suite from multiple vendor -- Microsoft can offer the whole shebang for one price.

And it can at the same time streamline the many licensing headaches involved with Windows, especially where virtual desktops are involved.

The move is something that wouldn't have been possible under the old Microsoft. Forget the whole per-user Windows licensing schema: Microsoft's productivity business would have been left behind by Apple's considerable enterprise market share if not for last year's decision to release Office for iOS.

Now, Microsoft has a way to make it easy to use Microsoft all the time, on every device, forever. And with the Enterprise Mobility Management piece, all the fine-grained enterprise controls can come with it.

It's also an implicit statement of recognition that users may not be on a Windows device forever.

When initial details on the Enterprise Cloud Suite were first released, Computerworld reported on the skepticism of analysts that the change would be as good as it seems on the wrapper.

Enterprises have to be careful to read the fine print very, very closely, or finding themselves out of compliance with this seemingly more liberal license.

To be sure, this "one-size-fits-most" entry point to the Microsoft cloud ecosystem is sure to leave some out in the cold -- not everybody wants Microsoft in all aspects of the IT organization, and the ability to pick and choose components of the cloud and mobility strategy is sure to find adherents.

Besides, there's still no official word on who exactly qualifies for this pricing, which actually has been in effect since Dec. 1.

Ultimately, Microsoft's new mobility strategy is a recognition that while it's come late to the market, it's prepared to offer IT organisations the real Coke where before they could only get the close-but-not-quite Pepsi.

"Or maybe it was actually Tab," Anderson quipped.