The modern data centre is built on three fundamental blocks... 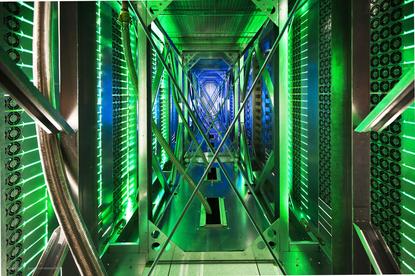 Having these elements, and the supporting infrastructure, such as networking, in software makes it easy to programmatically provision, configure and de-provision based on business needs.

That’s according to Charles Clarke, APAC Technical Director, Veeam, who when offering industry insight into software-defined data centres, believes the key business need in the global market is to be always on, that is to say, strive to provide high performance services 24x7.

“We fit well with other data centre elements defined in software,” he adds. “We support tools for software defined data centres, such as Microsoft's Hyper-V virtualisation platform, VMware vSphere and vCloud Suite.”

Clarke says Veeam “actively uses” software defined data centres too, with the company’s Australian division defining many services in software, including data centres that it uses for extensive testing for local pre and post-sales functions.

Key advantages of such an approach, according to Clarke, focus on “dynamism and agility,”

“The ability for an organisation to quickly provide services allows for a faster response to market demands,” he adds.

“Easier data recovery and management is a critical benefit. Virtualisation, a central building block for the software defined data centre, allows vendors like Veeam to build solutions that are purpose-made for data protection in these highly dynamic environments.”

Like many industry experts, Clarke believes the software defined data centre will evolve towards deeper cloud integration, both with public and hybrid cloud providers.

Closer to home across New Zealand, Clarke says when it comes to end-users adopting software defined data centres, and IT-as-a-Service, a logical early step has been Backup-as-a-Service and Disaster Recovery-as-a-Service.

“Veeam have been at the forefront of enabling ITaaS providers to protect user data and archive to offsite locations, ensuring organisations can rapidly and reliably recover data,” he adds.

“Cloud ProPartners use Veeam to deliver a range of data protection and monitoring services focused around Disaster Recovery as a Service and Backup as a Service,” he explains.

“This helps Veeam partners’ customers achieve the 3-2-1 rule of data protection: three copies of data (including one in production) on two different media, one of which should be offsite.

“We continue to see investment in this space to help facilitate cloud-based recovery and keep companies afloat in the event of disaster.”

But as the industry moves along at lightning pace, Clarke was quick to assess the challenges involved in moving to an Software Defined Data centre environment – for both vendors and service providers, as well as the end-user.

“Software defined data centres are a signpost for a new way of thinking,” he says. “It is the era of being always on with an expectation of zero downtime.

“A key challenge is encouraging organisations to realise that tools built for legacy data centres don't apply in this new age.

“In fact, using legacy tools can be detrimental to realising the benefits of the modern data centre as businesses get slowed down by cost, complexity and missing capabilities.”

In a bid to overcome such barriers, Veeam continues to build tools for the modern data centre, centred around virtualisation and the cloud.

So much so that the company last year upcoming support for the CloudConnect feature, which gives providers hosting software defined data centre's the ability to provide Backup as a Service with minimal configuration, and makes it easy for on-premise infrastructure to bridge the gap to the cloud.

In addition, the release of Veeam Backup and Replication version 8 is designed to recovery capabilities for application workloads running in the software defined data centre such as SQL, Exchange and Active Directory.

“Veeam remains at the forefront of virtualised data protection and features like Virtual Labs and Instant VM Recovery mean that those experimenting with services in the software defined data centre have a safety net built on reliable, rapid recovery,” Clarke adds.

And as end-users bring more software into virtualised data centres for better service provisioning, Clarke advises them to start by thinking about data protection rather than making it an afterthought.

“By having a solid, tested data protection strategy built for the modern data centre a company can provide the stable recovery platform to be creative with service provision,” he explains.

“Good recovery makes it easier to try new things, provision new services and be somewhat experimental, safe in the knowledge that you can back out of any decision.”

Working on the basis that virtualisation lies at the heart of the Software Defined Data centre, choosing tools built for virtualisation makes perfect sense, rather than trying to retrofit a legacy solution in the modern data centre.

“Virtualisation makes testing a less onerous task than it used to be, so I'd encourage everyone to perform due diligence and put any new software through its paces,” Clarke adds.

“The testing process itself often speaks volumes on how well the software will fit in to the software defined data centre.

“Aim for software that is easy to deploy and easy to use, but provides the extensibility you need to match the data centre's needs.”

The key point to highlight, for Clarke, and for Veeam, is that software defined data centre's mark an opportunity to do things differently.

“By using virtualisation and the cloud it is easier for those embracing software defined data centre's to meet the demands of the always-on business and bridge the availability gap between legacy and modern data centres,” he adds.