5 things you need to know about Windows 10 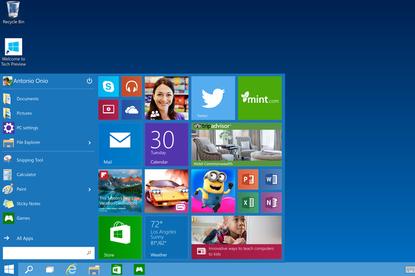 Windows 10, expected to ship sometime this year (Microsoft’s not offering more details on timing), features much-needed user interface improvements, security enhancements in identity protection and access control, and a unified code base and APIs to allow developers to build apps that will run on multiple devices.

These are all welcomed improvements given that many enterprises were slow to (or simply didn't) upgrade to Window 8.

"Security and manageability are always compelling, and the return of the Start menu and a cleaner split between desktop and tablet modes removes a major adoption barrier that enterprises had for Windows 8 and 8.1," said Forrester analyst David Johnson.

CIOs have reason to be cautiously optimistic about moving users to the next iteration of Windows. But how and when should they make the move? Below are five things IT leaders need to know about the next Windows.

1. It's an attempt by Microsoft to take Windows back to the future

Since launching the ambitious but flawed Windows 8 in 2012, Microsoft has been in a perennial state of damage control. In a failed attempt to make Windows better for touch devices, Microsoft botched the user interface and left legions of disappointed customers.

CIOs were particularly repelled by Windows 8 and its radically different, touch screen-optimised UI, as well as by its alternate traditional desktop interface, which was included for running legacy Windows apps but lacked key familiar features, namely the Start button and Start menu. The toggling between the two modes was also clunky.

"History shows that Microsoft over-rotated on touch, and distanced itself from traditional PC users that need, at least some of the time, a good keyboard-and-mouse experience," said Al Gillen, an IDC analyst. "The focus in Windows 10 is to re-balance the experiences such that commercial customers will see value in Windows 10 that they did not see in Windows 8."

Microsoft tried with partial success to address these and other issues in subsequent Windows 8 revisions and updates. But most CIOs clung instead to the solid, stable Windows 7, unwilling to subject their end users to a long, unpleasant and productivity-eroding learning curve.

One of the many companies that skipped Windows 8 was US-based health club chain L.A. Fitness. "It was too much of a change from what people are used to and we didn't want to go through the challenges of getting people comfortable with it and the time necessary to do so," CIO George Bedar said.

With Windows 10, Microsoft tackled head on the UI issues, and judging by publicly available preview versions of the OS, it apparently has finally gotten it right. The traditional desktop UI looks and acts a lot more like Windows 7, and the touch-optimised UI is more intuitive.

Also, the interplay between the two has been greatly enhanced -- Windows 10 is "adaptive," meaning it can detect which device is being used (desktop, laptop, tablet, large wall mounted monitor, smartphone) and adjust its rendering.

Microsoft has also pledged that upgrading from Windows 7 and Windows 8 to Windows 10 will much more seamless and straightforward.

With two-factor authentication, malicious hackers need to be in control of two pieces of information in order to break into a system, such as a password and a code sent to a user's device like a smartphone.

In the area of information protection, Windows 10 will have a data loss prevention (DLP) technology baked in that distinguishes between personal and corporate data, and protects the latter using "containment." Corporate apps, data, email, web content and other sensitive information will be automatically encrypted by Windows 10 both on desktops and mobile devices.

IT managers will be able to establish policies that control which apps can access corporate data, and Windows 10 also extends VPN control options to protect this data in devices owned by employees.

In the area of threat and malware resistance, Windows 10 will have features to lock down devices and only allow users to run apps that have been signed using a Microsoft provided signing service.

IT administrators will be able to determine which apps they consider trustworthy, such as those they sign themselves, those signed by ISVs, those available on the Windows Store, or all of them.

Windows 10 is the first version of the OS with a unified code base and APIs, meaning that apps built for it can run -- with minor modifications -- on different devices supported by the OS: smartphones, tablets, laptops, desktop PCs, the Xbox console, Internet of Things wares.

This is great news for end users, and for commercial and enterprise developers, who will have a much easier time at creating tools, applications and integrations for the OS, without having to re-write them from scratch for different devices.

"The platform enables a new class of Windows universal apps -- apps that are truly written once, with one set of business logic and one UI," said Kevin Gallo, Microsoft's technical lead for the Windows Developer Platform, in a recent blog post.

For Microsoft, it's also a way to spur the number of apps available for Windows mobile devices, since mobile developers had been less than enthused about spending time and resources creating apps for Windows Phone, given its tiny user base -- 2.7 percent of the global smartphone OS market in 2014, according to IDC.

"The demonstrations I have seen indicate that this is a real solution that will really improve the experience on Windows 10," he said.

While Microsoft's priority with Windows 10 was to reverse the Windows 8 missteps, and to include advances in areas like security, the company is also delivering some glitzy, whiz-bang features with the new OS. For example, Windows 10 will include the following:

Hologram technology: Windows 10 provides what Microsoft calls a "holographic computing platform" with APIs for developers to create 3D apps and with a HoloLens, a head-mounted holographic computer for viewing holograms in high definition and hearing them in surround sound.

Cortana: Microsoft's answer to Apple's Siri, Cortana is being ported from Windows Phone 8.1 to Windows 10, so users of the new OS can interact with their computers and applications using voice commands.

Two browsers: A new browser code-named Project Spartan will make its debut with Windows 10. It will be powered by a new rendering engine and provide what Microsoft calls "a more interoperable, reliable, and discoverable experience." Advanced features include web-page annotation, clutter-free reading mode and Cortana integration.

Project Spartan is being designed as a "universal" browser that will work across the different devices Windows 10 runs on, and will be kept constantly updated as a service with security and feature enhancements.

The new browser is backwards compatible with existing sites designed for IE, but to make sure Windows 10 plays well with legacy websites that require support for older technologies, the OS will also ship with IE 11.

While early reviews of Windows 10 preview versions have been mostly positive, CIOs should have a detailed, strategic plan to evaluate the OS internally, not only to make sure it's stable but also to see how it performs specifically in their organisation, with specific commercial and custom apps, hardware devices, and the like.

"We think it will be vital for CIOs to familiarise themselves with Windows 10. Forrester believes that unlike Windows 8 and 8.1, Windows 10 will be adopted as an enterprise IT standar," Forrester's Johnson said.

At L.A. Fitness, a group within the IT department has been testing Windows 10, and they haven't yet identified any concerns, but Bedar isn't taking any chances. He has decided the OS won't be rolled out until Microsoft comes out with the first service pack update.

"We won’t deploy this when it first comes out. We'll wait a while. We don't have any pressing reason to upgrade to it at this point," he said. "We have time to let it settle down, and let the early issues work themselves out. Then we'll proceed with it."