Here are the components that will power your next smartphone

Qualcomm, MediaTek, Samsung and LG are all working on exciting new products 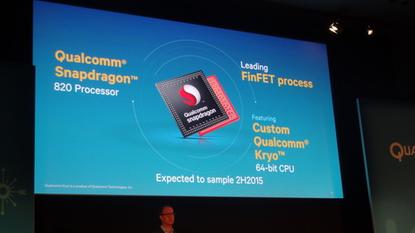 The last couple of months haven seen the launch of a clutch of new smartphones -- and also new chipsets that aim to make the next generation of smartphones more powerful and simpler to recharge.

Competition between chip makers is increasing, with companies spurring each other to improve smartphone performance. Here are some of the components and technologies that will help make it happen:

The Snapdragon 820 will be the first processor to use Qualcomm's homegrown ARM-based Kryo architecture -- and also the first to use the company's new Zeroth platform for adding machine learning capabilities. The company plans to make samples available to phone manufacturers in the second half of the year. Qualcomm will need to have the chips ready for mass production in the first half of 2016 to catch the next wave of high-end smartphone launches, or manufacturers may look elsewhere -- as Samsung Electronics did this year, choosing to use one of its own Exynos processors for its Galaxy S6.

In February, the company also launched four new processors for mid-range smartphones, including the Snapdragon 620. This eight-core processor integrates LTE-Advanced and has enough power to shoot 4K video at 30 frames per second. The first devices containing it will go on sale during the second half of the year.

All this doesn't change the fact Qualcomm will still face stiff competition from companies such as MediaTek and Intel, which despite all its struggles in the mobile space doesn't seem ready to give up anytime soon. Also, if the Samsung's Galaxy S6 and S6 edge become big successes it might embolden the company to use its own Exynos processors in more products.

Smartphone vendors try to tempt us to upgrade with screen improvements. Typically, they target screen size and resolution, but these have reached a plateau, especially on high-end products, so display makers are turning their attention to other areas, including the size of the bezel.

At the end of last year LG Display said it had developed a 5.3-inch full HD panel for smartphones with the world's narrowest bezel at 0.7 millimeters -- less than the thickness of a credit card. The development has been possible thanks to a technology LG calls Neo Edge, which uses an adhesive instead of double-sided tape to attach and completely seal the edges of the panel's circuit board and backlight unit.

Hopefully, the company will be able marry the technology higher resolution screens, as well. On screen sizes around 5.5 inches just a couple of millimeters can do a lot to improve handling. Even if it can't, the 5.3-inch screen could if combined with the Snapdragon 620 processor and Samsung's new 128GB storage module (see below) form the basis of a really competitive mid-range smartphone.

One area where affordable smartphones have trailed their more expensive counterparts is integrated storage size, but a chipset Samsung launched last week may signal a change. The company's new 128GB storage product is targeted at mid-range smartphones and tablets, the company said.

Even though high-end smartphones use storage with better performance, the development adds to the attraction of budget smartphones, which have recently improved to such an extent that they make it harder to decide whether buying higher-end models is really worthwhile.

Samsung expects to see devices with 128GB of storage in the near future. To what extent that happens remains to be seen, but it seems unlikely since vendors like to upgrade their products in small increments, and many existing models have just 8GB of storage today. Samsung hopes vendors will forego microSD card slots and instead use its chipset to keep consumers happy. That's what the company has already done on its own Galaxy S6 and S6 edge.

So far, wireless charging has mainly been an option on high-end smartphones, but that looks likely to change this year. This month MediaTek launched a chipset that aims to make the technology available on more affordable devices.

One of the main advantages with the MT3188 is compatibility with all existing standards for wireless charging, so users aren't limited in what chargers they can use. The chipset is currently in mass production and will be adopted by smartphones as well as tablets and wearables, according to MediaTek.

Chip maker NXP Semiconductors is also helping lay the groundwork to boost wireless charging adoption. Just last week the company introduced a reference design that will help cut the cost of wireless chargers based on the Qi specification. A reference design is a blueprint that makes it easier for vendors to build products, in this case a charger based on NXP's components.