The Upload: Your tech news briefing for April 14 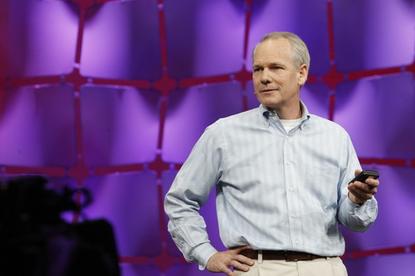 Kurt DelBene is returning to Microsoft, where he was most recently president of the Microsoft Office Division. (photo from 2013)

Kurt DelBene, who left Microsoft as president of its Office group in 2013, is coming back to Microsoft as executive vice president of corporate strategy and planning, reporting to CEO Satya Nadella. After leaving Microsoft last time, he did a stint helping the federal government recover from the bungled Healthcare.gov launch, and has been a partner in a venture capital firm. He'll be on the lookout for acquisition targets for Microsoft.

A 56-page notebook manuscript by Alan Turing, the English mathematician considered to be the father of modern computer science, sold at auction in New York Monday for $1.025 million. Turing wrote in the notebook in 1942 when he was working in Bletchley Park, England, trying to break German military code. The notebook sold Monday contains notes on the foundations of mathematical notation and computer science.

There's a potential new powerhouse looming in telecommunications and networking equipment: Alcatel-Lucent and Nokia have confirmed they are discussing a merger. The Wall Street Journal reckons the combo could provide a competitive counterweight to Ericsson and Huawei, with combined revenues last year that topped its Swedish and the Chinese rivals.

IBM wants all the health data in Watson

The shiniest tool in IBM's chest is the powerful cognitive computing system known as Watson, and now it's taking it to another problem set where big data analysis can pay off: health care. On Tuesday it unveiled the Watson Health business unit, and partnerships with Apple (for the data mined by mobile apps for HealthKit) as well as medical companies Johnson & Johnson and Medtronic. IBM aims to collect reams of data in its Watson Health cloud, for the benefit of researchers, and doctors creating treatment plans.

That didn't take long. Design a beautiful but slippery phone, and see your gorgeous shape swathed in an ugly protective case. Design an elegant smartwatch that can't keep working much past midnight, and see it turn into a pumpkin with this very bulky, very orange supplemental battery-cum-cuff, PC World reports.

China's 100-petaflop plans may be blocked by U.S.

Sharp is demonstrating a prototype 5.5-inch display with the ultra high-def resolution known as 4K and a pixel density of 806 pixels per inch. For comparison, Apple's iPhone 6 Plus 5.5-inch screen has a density of 401 ppi. The Sharp display isn't ready for mass production yet. The company wants to sell the component to smartphone manufacturers, and doesn't yet have a plan to include it in its own Aquos line of smartphones.

Catch a glimpse of the Alan Turing manuscript that sold for more than $1 million at auction on Monday.