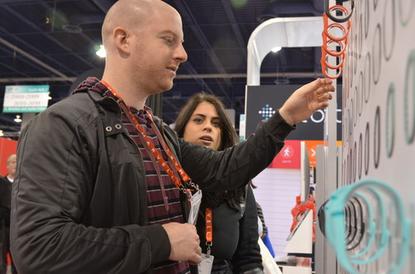 CES attendees check out the fitbit booth, looking at the fitbit flex, a wireless wristband that tracks steps, distance, calories and sleep. All can be managed from a mobile device.

Jawbone has filed its second lawsuit against Fitbit in less than two weeks, claiming its activity tracking products infringe several of Jawbone's patents.

The new suit, filed Wednesday in San Francisco by Jawbone parent company AliphCom, seeks unspecified damages and an injunction to block the sale of Fitbit devices such as the Flex, Charge and Surge bands.

Late last month, Jawbone filed another lawsuit, accusing Fitbit of poaching its employees and stealing trade secrets. Fitbit has said it has no knowledge of any such information in its possession.

In its latest complaint, Jawbone says it will also ask the U.S. International Trade Commission to investigate Fitbit, which could potentially lead to an import ban on Fitbit products.

Jawbone says it has hundreds of patents granted or pending, and claims that Fitbit infringes several of them. One patent describes a "general health and wellness management method and apparatus for a wellness application using data from a data-capable band."

Another patent covers a "system for detecting, monitoring, and reporting an individual's physiological or contextual status."

Fitbit didn't immediately respond to a request for comment on the latest suit.

The timing is bad for Fitbit, which is preparing to go public on the U.S. stock markets. It also faces intense competition from a number of rivals, which also include Garmin and Apple with its Apple Watch.