A look back at Randal's finest work for Computerworld New Zealand. 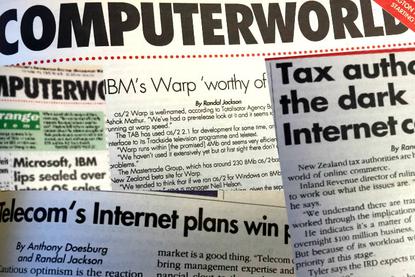 The debacle that is Novopay led many to refer back to a previous high profile project that made headlines when the government pulled the plug. The Integrated National Crime Information System – better known as INCIS – was designed to provide information to New Zealand police but was abandoned in 1999.

Police had presented a business case for INCIS to the government in 1993. The prime contractor was IBM, whose OS/2 desktop operating system was later revised to Windows NT.

The cost of the failed project is usually quoted at $100 million.

But in hindsight, INCIS wasn’t that big a deal. Around $84 million was spent on infrastructure. The “quibble”, as one person close to the project puts it, was over $16 million of software.

The State Services Commission subsequently monitored any information technology project involving capital investment of more than $7 million in any one year, as a result of a ministerial inquiry.

“Today, they’re all terribly conscious of risk but don’t want to take any chances,” says consultant Tony Hood, a former boss of Databank. Hood, incidentally, was hired to produce a report for Police into INCIS.

“There are now so many processes involved and so many people. There is very little development; rather, a lot of buying of packages.”

He describes the numbers of processes to be followed as “enormous”.

Hood harks back to the original Databank system, a banking system which covered New Zealand. “It took just six guys 18 months to develop.”

The idea for Databank, incidentally, came from a group of IBMers having a late-night drink in the Piano Bar at Wellington’s James Cook Hotel.

Hood says that government departments today make sure they don’t run out of money when compiling budgets.

He recalls when working on the FIRST project at Inland Revenue, he and Colin Macdonald (now the Government CIO) terminated an early contract and went back to the vendors involved.

Rather than issue another request for proposal, which would have involved the vendors’ parent companies overseas, they proposed dealing directly with the local subsidiaries.

“They were all happy with that – companies such as Unisys, IBM, EDS and Datacom – which reduced costs enormously.”

Inland Revenue made the headlines two years ago when it abandoned an Oracle project to deliver legislative changes to student loans. It had spent $21 million without success, and chose instead to upgrade FIRST.

Hood says procurement is another area where huge amounts of money are spent.

The government has introduced all-of-government contracts, which reduces the number of technology suppliers. Now, the Ministry of Business, Innovation and Employment has issued an RFP that will significantly change the way departments buy advice from consultants.

The rationale is that agencies will be able to work out what level of quality they are getting and whether suppliers are providing value for money.

Industry body NZRise says that adopting the same procurement practices used to buy commodity products might not make sense when buying services that are “creative and intellectual”.

They analysed four consecutive health care structures, the failure of the Health Waikato project, which was abandoned after an investment of $17 million; INCIS, and Landonline.

The authors describe how ICT projects seldom if ever, deliver the financial and other benefits they promise.

Dangerous Enthusiasms is well worth a read.

Overseas studies, such as those by the Standish Group, whose Chaos Reports are widely quoted, Mercer Consulting, and the US National Institute of Standards and Technology don’t agree on percentages when it comes to software failures but generally do agree that it is in the US$50-80 billion range annually.

Mercer says that when the true costs are added up, as many as 80 percent of technology projects cost more than they return.

Little wonder then that Inland Revenue is suggesting it may spend as much as $1.5 billion to upgrade its systems over the next 10 years. It is certainly budgeting plenty of “fat” for unforeseen problems.

Customs and the Ministry of Primary Industries have got in first, announcing they are delaying the first stage of their new electronic border system until August 1 so that testing, which has taken longer than expected, can be completed.

This “just in case” approach is more than sensibile IT — it’s smart public relations.

*This article was part of a series looking back at major issues covered by Computerworld, to mark the final print edition published Monday July 1, 2013.