Battle brewing as payments move from wallet to wrist 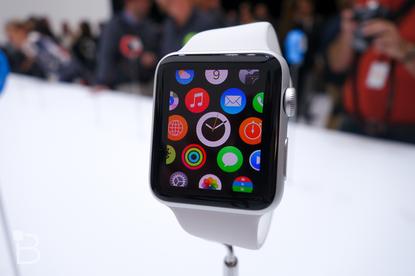 The growing popularity of contactless payments and wearables are coming together on products such as the Apple Watch and the £24.99 ($US40) bPay wristband from British company Barclaycard.

The two companies are looking to benefit from a growing interest in contactless payments.

In the UK payments made this way using mainly credit and debit cards rose 331 per cent year-on-year last year with 319 million transactions, and the launch of Apple Pay has shown there is an appetite for contactless payments in the U.S.

Apple and Barclaycard are pitching their products, the Watch and the bPay wristband, as a convenient way to make payments. It's hard to argue with that; since users just have to lean over to make a payment as opposed to take out a card from their wallet or get out the smartphone.

They are likely to soon get more competition. Recently it was reported that Jawbone and American Express are working on a fitness band with support for payments. Fitbit has said the company is open to the idea too.

Other candidates to get support for contactless payments are future Android Wear-based smartwatches. For now, though, Google and Samsung Electronics are focusing on smartphones with the upcoming Android Pay and Samsung Pay, respectively.

In addition to the band, Barclaycard also announced a keyfob and a sticker for making contactless payments. All three will go on sale on July 1. The bPay sticker costs £14.99 and the bPay keyfob is priced at £19.99.

Barclaycard is likely hoping the low price tags will make up for the fact they only have one use. The company knows the future is integrating payments with wearables that can be used for many things. It's in discussion with a number of possible partners but can't say anything more at this stage, according to a spokesman.

The bPay products can make payments at over 300,000 locations and are available to anyone with a U.K. Visa or MasterCard debit or credit card. Users can add funds online, using a new mobile app, or set their account to top up automatically when the balance falls below a certain level, Barclaycard said.

The launch follows a trial that started last year, also using a wristband. Barclaycard choosing to go from test to real products is a vote of confidence for contactless payments.

Apple and Barclaycard will go head-to-head when Apple Pay is also launched in the U.K., in July.