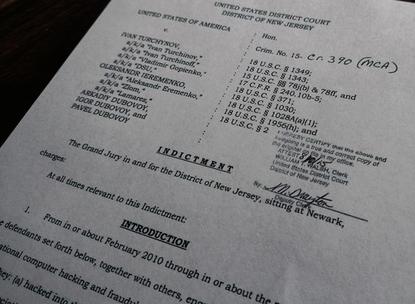 Nine people face wire fraud, security fraud and other charges on Aug. 11,2015, for a scheme in which they allegedly hacked into the networks of three press release websites and then traded on nonpublic information.

Indictments unsealed Tuesday in the district courts for New Jersey and Eastern New York accused the defendants of stealing approximately 150,000 confidential press releases from the servers of Marketwired, PR Newswire Association and Business Wire. The defendants allegedly used the information from more than 800 stolen press releases to conduct stock trades, according to the U.S. Department of Justice.

DOJ officials believe this is the largest newswire hacking scheme ever prosecuted, the agency said. The press releases stolen were from companies traded on Nasdaq and the New York Stock Exchange, the DOJ said.

The defendants were a "well-organized group that allegedly robbed the newswire companies and their clients and cheated the securities markets and the investing public by engaging in an unprecedented hacking and trading scheme," U.S. Attorney Paul Fishman of District of New Jersey said in a statement. "The defendants launched a series of sophisticated and relentless cyber attacks" against the companies.

Early Tuesday, law enforcement agencies seized 17 bank and brokerage accounts containing more than $6.5 million of alleged criminal proceeds. The government also took steps to seize 12 properties, including a shopping center in Pennsylvania, an apartment building in Georgia and a houseboat.

Five of the nine defendants were arrested in the U.S. this morning, and four remain in Ukraine. The DOJ issued international arrest warrants for those four defendants.

Two of the defendants, both computer hackers based in Ukraine, used a series of sophisticated cyberattacks to gain access to the networks of the three press release distribution services between February 2010 and this August, according to the indictments. They stole soon-to-be-released press releases by public companies concerning earnings, revenue and other financial information, the DOJ said.

The traders created wish lists for the hackers of their desired upcoming press releases from Marketwired and PR Newswire. Many of the trades made by the defendants occurred on the same day, but before the press releases were made public, resulting in a "flurry" of trading activity around a stolen press release, the DOJ said.

Among the companies targeted in the scheme: Caterpillar, Hewlett Packard, Home Depot, and Verisign.

The computer fraud counts carry a maximum potential penalty of five years in prison and a $250,000 fine, or twice the gain or loss.  The aggravated identity theft counts carry a mandatory prison term of two years.