“As a startup selling to enterprise customers, having IBM’s brand behind us adds extra credibility." 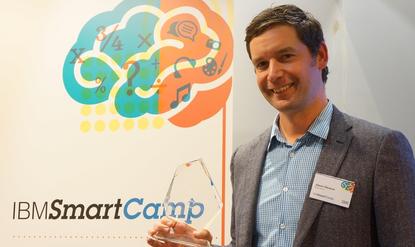 The data integration specialist was one of five IT startups from around New Zealand invited by IBM to participate in the competition, held in Auckland on Thursday, September 17.

Eight Wire automates the thousands of hours of work required to move data between databases, files and the cloud with IBM SmartCamp Auckland’s judges recognising Eight Wire as having a solution to meet the data integration challenges experienced by nearly all businesses.

This is the first SmartCamp event to be held in New Zealand as part of IBM’s Global Entrepreneur Program, a series of worldwide events in which expert advisors - including venture capitalists, serial entrepreneurs, and technical specialists- mentor participating teams, who subsequently pitch their ideas to the a judging panel.

Following the win, Eight Wire will receive three months’ mentoring and access to technology solutions from IBM, equivalent to US$120,000.

The startup will also have an opportunity to be selected to progress to the regional finals, the winner of which will be invited to IBM’s SmartCamp Global Finals in San Francisco in early 2016.

“The connections and knowledge we gained today at IBM SmartCamp will help us to refine our strategy and increase our profile as we tackle international markets.”

IBM SmartCamps are designed to open up opportunities for startups to scale quickly, particularly by taking advantage of cloud-based technologies.

“The industry mentors and judges now look forward to following the progress of all five participants.”