Raspberry Pi Zero: The $US5 computer is here

The Raspberry Pi Zero has the same computing capabilities as the original Raspberry Pi, minus some of the ports 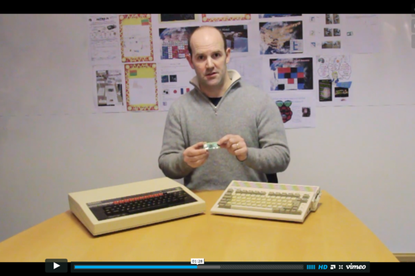 Eben Upton, creator of the Raspberry Pi, holds the 65x30mm Raspberry Pi Zero next to two of the home computers from his childhood in this screenshot from a video released by the Raspberry Pi Foundation on Nov. 26, 2015. Credit: Screenshot by Peter Sayer

The Raspberry Pi Foundation has hit rock bottom. After years of working to lower the cost of hobbyist and educational computing, founder Eben Upton says it can go no further: at just $US5 its latest creation is as cheap is it can make a computer.

The $5 Raspberry Pi Zero follows on from the wildly successful Raspberry Pi A, B and 2 computers, which cost $20 to $35.

But despite the staggeringly low price, it still has many of the same features, and runs about 40 percent faster than the Raspberry Pi 1.

At the heart of its 65 x 30 millimeter circuit board is a Broadcom BCM2835 application processor, the same as in the Raspberry Pi 1, with a 1GHz ARM11 core. The board holds 512MB of RAM, and the operating system is loaded from micro-SD card.

There's a mini-HDMI socket for 1080p video output, and micro-USB sockets for data and power.

The board is as expandable as its predecessors: Its 40-pin GPIO header has identical pinouts, although the pads on the circuit board are "unpopulated," meaning you'll have to solder on your own connector. The same goes for the composite video output: The connection is available, but if you need a socket, you must solder it yourself.

In comparison, the Raspberry Pi 2 Model B has additional memory, a quad-core processor, audio in/out, three additional USB ports, and direct connections for a camera and a display.