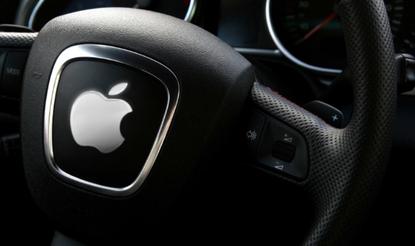 One is an iconic powerhouse, with revenues surpassing $US80 billion and a brand synonymous around the world with unrivalled luxury.

The other is simply a titan of industry, capable of gobbling up its new-found ally in a move that could send shockwaves across the technology and automobile sectors.

“With hundreds of billions of dollars overseas and ridiculous profits domestically it is safe to say that Apple can have its way with whatever industry, market or project it sets its mind to,” says Roger Lanctot, Research Analyst, Strategy Analytics.

“The only sad thing is that money alone can't cure cancer or bring Middle East peace.

“Money can, however, help bring a new car company into being, which is precisely the prospect being debated in duelling reports out of Cupertino.”

As explained by Lanctot, Daimler CEO Dieter Zetsche recently admitted that during a trip to Silicon Valley, he was rather surprised to find great progress being made by both Apple and Google on their well known car projects.

But despite a serious lack of evidence and Apple remaining coy on the idea, it’s become a foregone conclusion that the tech giant is building its own car, rivalling Google’s own self-driving cars which have been around for years.

Such speculation is based around Apple’s well-documented attempts to initiate talks to partner with BMW on a rumoured electric car project in 2014, before ultimately pulling out of the idea.

Two years on however, and things appear to have changed.

For the project, Apple also allegedly hired Johann Jungwirth, the former-president and CEO of Mercedes-Benz Research and Development North America, as well as at least one transmission engineer.

“It's clear that Apple can do as it pleases and with such vast resources at its disposal the only question is Apple's level of motivation,” Lanctot admits.

“But it may be a question of how Apple takes on the automotive industry. It’s the usual question of build, buy or partner.”

With millennials showing little interest in cars, Lanctot speculates that maybe cars aren't quite as exciting an opportunity as they once were - in spite of record 2015 vehicle sales in the U.S.

“Skeptics repeatedly point to Apple's profit margin comfort level being misaligned with the leaner margins of the auto industry, but believers expect Apple to overcome rather than accept that state of affairs,” he questions.

The two stories do raise the question as to what an Apple car will be however.

What will an Apple car look like? Who or what is it for? Is it a shared vehicle or a service delivery platform? Is it an aspirational sports car suitable only for one percenters? Is it super fast or super safe or super efficient - an EV, of course.

“It's a messy question, along the lines of what do you want to be when you grow up,” Lanctot adds.

“What would make an Apple car wonderful? Zero emissions and zero fatalities? Nissan, Volvo and others are already well along the way toward addressing those twin value propositions.”

Lanctot says across the fence, Google has multiple points of entry into the auto industry including maps, self-driving algorithms, operating system software and applications.

Yet Apple has distinguished itself mainly as a hardware and design company while redefining mobile device interfaces.

“An acquisition of a car company will enable Apple to have an immediate impact, and BMW is the most appropriate acquisition target given the extraordinary alignment between BMW and iPhone ownership.”

Additionally, Lanctot claims that the automotive industry globally is “plagued” by over-capacity or misaligned capacity.

For Lanctot, Cook is most likely disinterested in adding yet more excess capacity with all of the associated negative environmental impacts.

“BMW is expected to see compound annual production growth of 4.2 percent through 2022, based on estimates from LMC Automotive,” he adds.

“This growth - which puts BMW on a path to produce nearly three millions cars in 2022 - is an appealing prospect for Apple as is BMW’s philosophy of vehicle connectivity.”

Lanctot believes in the current market, BMW has one of the most advanced visions of vehicle connectivity for data acquisition and integration into the car owning experience and for the purposes of enhancing vehicle contextual awareness, safety and efficiency.

The question that Apple is no-doubt facing on a daily basis, though, is why. Why make a car?

“Apple can make cars, buses or airplanes if it so chooses,” Lanctot adds.

“With transportation caught in a vortex of generational disruption it's just possible that the way forward is too foggy even for Apple.

“But Apple, at least, has demonstrated repeatedly its ability to convince consumers to line up for whatever it might have on offer - with the possible exception of smartwatches.”

As a Associate Director in the Global Automotive Practice, Roger Lanctot has a powerful voice in the definition of future trends in automotive safety, powertrain, and infotainment systems. To read more of his work click here