“iPad Pro is a new generation of iPad that is indispensable and immersive..." 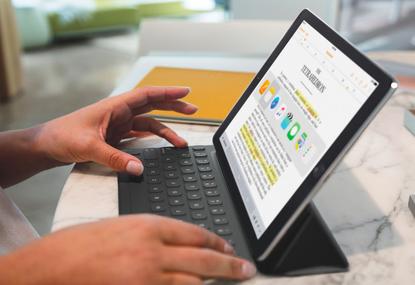 Apple will today release the 9.7-inch iPad Pro to the New Zealand market, billing the standout new device as a replacement for PC users.

With over 600 million PCs over five years old currently in the marketplace, the tech giant says the all-new 9.7-inch iPad Pro is targeting current Windows users, as well as existing iPad customers.

“iPad Pro is a new generation of iPad that is indispensable and immersive, enabling people to be more productive and more creative,” says Philip Schiller, Senior vice president of Worldwide Marketing, Apple.

“It’s incredibly fast, extremely portable, and completely natural to use with your fingers, Apple Pencil and Smart Keyboard. And now it comes in two sizes.

“It is the ultimate upgrade for existing iPad users and replacement for PC users.”

Schiller says the new iPad Pro delivers improved performance with the 64-bit A9X chip that rivals most portable PCs, along with a four-speaker audio system that is twice as powerful.

In a big plus for creative Kiwis, Apple Pencil and Smart Keyboard, available for purchase separately, bring breakthrough levels of precision and utility to iPad Pro.

Advanced sensors in Apple Pencil measure both pressure and tilt for a natural drawing, annotating and note-taking experience.

Schiller says a new Smart Keyboard is custom-designed for the 9.7-inch iPad Pro, offering a “thin yet durable” keyboard that never needs to be charged or paired over Bluetooth, while being easily foldable into a protective Smart Cover.

As Schiller points out, designers, illustrators and businesses have quickly adopted iPad Pro and “it’s changing the way they work”.

“iPad Pro and Apple Pencil are the closest we’ve ever been able to get in the digital world to actually drawing on paper.”

In New Zealand, the 9.7-inch iPad Pro comes in silver, space gray, gold and a new rose gold metallic finish, and is available from a starting price of NZ$1,049 for 32GB on WiFI.