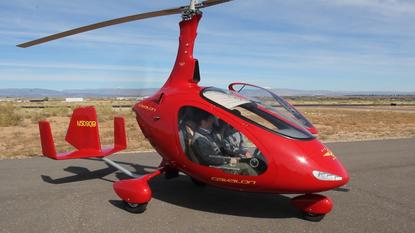 Roosevelt, Utah, now has the distinction of being the first city in North America to have a flying car school. The location was chosen both for its mountainous terrain and concentration of reputable instructors, according to Mark Jennings-Bates, vice president of sales for PAL-V.

Operators of the PAL-V Liberty flying car will be required to have a sport pilot license, which usually entails a minimum of 20 hours of flight time: 15 hours with an instructor and five hours solo. During instruction, trainees will be taught to communicate with traffic control, navigate using the vehicle's instrumentation, and maneuver.

Instruction will take place on existing gyroplanes, the same flying technology used by PAL-V's own flying cars. Unlike helicopters, the blades on a gyroplane are not directly powered by an engine, which means that the gyroplane can't land and takeoff vertically. Instead, a motor either at the back or front of the vehicle creates horizontal thrust and organically rotates the blades on top as the gyroplane gains speed. This generally makes them safer and easier to operate because, even in the event of an engine failure, the gyroplane can glide to the ground.

PAL-V is still in the process of receiving approval from the U.S. Federal Aviation Administration and the European Aviation Safety Agency for its flying car, though the company says that EASA has certified all the vehicle's individual components and it's now just a matter of putting them all together. If all goes well, PAL-V plans on rolling out its flying cars to customers in 2018.

The car will come in two configurations. The PAL-V Liberty Limited Pioneer Edition, which will cost US$599,000 and the PAL-V Liberty Sport at $399,000. Though the cars will still fly like a gyroplane, Jennings-Bates says the design will be quite different from what we've seen with the PAL-V One prototype.

"It's got a very distinct Italian sports car flair to it. It's very James Bond."

The car will come with two engines and a lowered suspension, Jennings-Bates says. The new design is expected to be revealed within the next few weeks.