Facebook wants you to hang out with your friends in VR 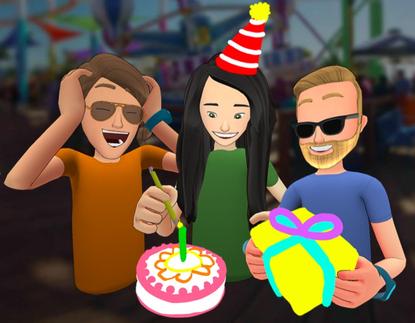 Facebook is making it possible to hang out with your friends in virtual reality using Spaces, a new app the company launched Tuesday for the Oculus Rift. The app will allow people to join a shared, immersive video call, represented by a personalized avatar.

Using Spaces, people can hang out around a virtual reality table, share three-dimensional drawings and use the Rift’s built-in microphone to chat with one another. Users can also surround themselves and their friends with 360-degree photos and videos from Facebook’s library of content.

People who don’t have a Rift headset can also be included in a Spaces hangout by using Facebook’s Messenger video calling functionality. Users will be able to view a Space from their smartphone, and have their video call shown inside the virtual reality environment.

Spaces is Facebook’s first foray into social virtual reality, and shows the power of combining the social network with Oculus hardware. For example, a group of far-flung friends can act as though they’re hanging out in person using Spaces.

One of the key benefits of Facebook integration is the way it enables avatar creation in Spaces. The software uses computer vision to suggest avatar traits based on users’ profile pictures, so folks can start out with a cartoonish, digital representation of themselves that should roughly approximate reality.

Users can also alter the avatars to their hearts’ content, in the event they want to look a little (or a lot) different. Inside Spaces, users are identified with a little name bubble floating over their avatars, which also include their — you guessed it — Facebook profile pictures.

In keeping with current trends, Facebook also added a virtual selfie stick to Spaces, so that users can take a photo of everyone together, and then share that to the social network, to make their friends jealous of not having a pricey VR peripheral and heavy-duty PC.

Harassment is a major potential issue with social VR applications, but Facebook seems to have shortcut some of that problem by restricting users to only inviting people to Spaces who they’re connected to on the social network. The social environment is also fairly limited — Spaces can only host groups of up to four people at this point.

However, this experience seems like a compelling piece of software for attracting people to VR who wouldn’t ordinarily be interested. It doesn’t require users to be professional gamers, they just have to be interested in chilling with people they know.