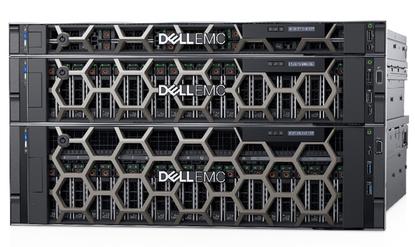 Just a few years back, Dell said it didn't want to mimic sloppy behemoths like IBM or HP and, instead, wanted to be lean and focus on the mid-market.

But after a US$67 billion merger with EMC in 2016, the new company called Dell Technologies is a full-bodied systems integrator, offering hardware, networking, storage, and services.

In the meanwhile, the company's rivals slimmed down. The new Hewlett-Packard Enterprise focuses on data-center hardware, while IBM focuses on software.

Dell Technologies is taking a page from Alphabet, a bunch of autonomous companies like Google working together. Dell Technologies includes hardware company Dell and storage provider EMC, with many independent operational units that have combined to strengthen the company's infrastructure stack.

The data center offerings feature Dell's PowerEdge servers. At next week's Dell EMC World, the company is introducing the new PowerEdge 14 G -- a moniker for 14th generation -- servers, which have been redesigned to integrate offerings from units that are now part of the Dell behemoth.

The servers have been tuned to fit into hyperconverged environments and to be easily deployed in cloud, on-, and off-premise server installations. The servers are designed to work in tandem with EMC storage, VMware virtualization software, and Pivotal open-source tools to create middleware that sits on top of cloud environments.

Dell didn't share full specifications or prices for the new family of servers. PowerEdge servers will likely be based on Intel's Skylake chips, which are bringing new interconnects, processors, and networking fabrics to data centers. The servers will make data centers more scalable and connect to all-flash EMC storage arrays much faster.

Dell did not say if the servers would support AMD's upcoming 32-core chip called Naples, which is based on the Zen architecture.

Conventional servers pack memory, storage, and networking into one box, but the new PowerEdge servers will be flexible enough to decouple those into pooled units. An important component will be NVDIMM, which is DRAM merged with SSD-style storage components on it to retain data. NVDIMM is much faster than SSDs for caching because it runs on the DRAM bus, which is much faster than the conventional storage bus.

Faster interconnects will reduce latency between server and storage arrays. It's a matter of time before 25-gigabit ethernet becomes pervasive, and there will be the adoption of new protocols to boost communications inside data centers, said Brian Payne, vice president of product management at Dell.

EMC's ScaleIO technology has been adapted to work with PowerEdge 14G and will bring faster storage access to the servers, Payne said. Dell is claiming a significant reduction in latency -- up to 19 times faster -- which should boost storage performance.

Dell doesn't boast a strong middleware portfolio yet but has the tools to build applications and cloud services within computing infrastructure. Virtustream is an important management software for cloud services on PowerEdge, while the Pivotal open-source tools provide a framework to write applications. Dell unit RSA provides security tools, while VMWare provides virtualization to make scale-out, hyperconverged, or modular data centers highly efficient.

Payne recognized that new applications like machine learning -- which requires GPUs or deep-learning chips -- are changing data center constructs. Dell's PowerEdge servers are ready for those new types of applications and hardware.

"We are a one-stop shop that can do all those things," Payne said.

There are also improvements in PowerEdge servers. The systems have been redesigned for better cooling, and an NVMe boot component will boot systems faster. A feature called iDRAC 9 will be able to automatically detect errors, and Dell will send replacement parts quickly. That helps keep the system up and running while reducing the workload of system administrators.

Every server generation provides an important bump in performance and carries the benefits of new silicon and interconnects, said Charles King, principal analyst at Pund-IT.

Dell has signed up for the high-performance Gen-Z interconnect, but it's not certain if it will be a part of the PowerEdge 14 server.

Dell is still in transition, with the operations for Dell and EMC are being run out of separate headquarters. The level of integration between servers and storage that will come with PowerEdge 14 remains a question, King said.

But EMC also works with other customers, and Dell likes to supply servers to customers who don't want advanced storage or networking features. The two-socket server market still represents a large volume of the larger server market.

Also, Dell has strong partnerships with Oracle, Microsoft, and Red Hat and will want to maintain those partnerships, King said.

Dell did not provide availability information for the servers.