How ShadowTech can lead more women into ICT 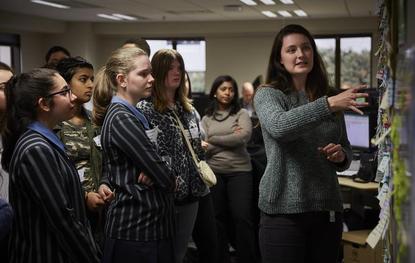 “Technology is part of every industry, and most careers involve some type of technology. We are certain that opportunities like ShadowTech make a difference in addressing the current gender imbalance in ICT,” says Edwina Mistry, director of NZTech TechWomen.

“Shadow Tech connects girls at school with women working in the tech sector, who act as mentors,” says Mistry, who started the programme at Manukau Institute of Technology, where she was industry and community engagement manager.

“Secondary school students get to spend a day with a woman in tech mentor, experiencing a day in the life of an IT professional,” says Mistry.

“One of our goals is to encourage and inspire girls to pursue study and careers in IT, by letting them experience the various careers in technology.”

The programme, initially called  ‘Shadow IT’ and is now being held nationally by NZTech as part of TechWeek.

More than 600 girls will participate in this year’s ShadowTech across six cities in New Zealand.

More than 191 students registered for the programme in Wellington, with 142 mentors from 37 organisations, both government and private organisations,  participating.

“We’re for New Zealand, so we’re really pleased to continue our support of ShadowTech. Last year we were delighted by how the students engaged with our people, gaining insights into where their studies could take them,” says Andrew.

“This year we have reached out to a higher number of schools, so we can broaden our reach and inspire even more young women to consider careers in technology.”

The ShadowTech day in Wellington starts at Te Auaha New Zealand Institute of Creativity, with a focus on digital design and creative technologies. Secondary school girls will gather at Te Auaha to hear from guest speakers, including Clare Curran Minister of Broadcasting, Communications and Digital Media, Government Digital Services; WelTec and Whitireia head of IT Mary Proctor; game designer and academic Dr Hazel Bradshaw; and Eva Sherwood, chair of TechWomen.

The students will be working on a range of projects, from robotics technology to data analytics.

A total of 175 students registered in Auckland, with 104 volunteers from 32 businesses who will host them for the day.

The ShadowTech programme comes amidst rising concern over the need to increase female participation in technology roles.

Analyst firm Gartner notes while women make up nearly half of the global workforce, only 31 per cent of IT employees are female. This number drops to 22 per cent at the leadership level

This lack of diversity in technology is glaring, it points out. According to the 2018  Gartner CIO Survey, 13 per cent of CIOs are female. The proportion has remained much the same for years.

The MYOB Women in Tech report, meanwhile, points out men are twice as likely to study ICT at a tertiary level, and almost five times more likely to study engineering and related technologies.

Recent data from the Ministry of Education covered in the report reveals a similar trend. In 2015, there were only 1,445 females studying ICT, compared to 3,160 males, and only 1,675 female engineering students compared to 7,580 male students.

“To set ourselves up for the future, we need to ensure we have the people and the resources to build a progressive ICT sector that contributes to the wider New Zealand economy,” says MYOB general manager Carolyn Luey.