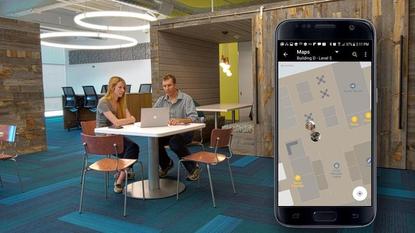 A digital workplace mockup by Aruba

If there was one message Aruba seemed to stress at the Atmosphere 2018 conference in Sibenik, Croatia, this week, it was that the HPE subsidiary and mobile enterprise networking company wants to be indispensable for companies trying to deliver ‘experiences’ through ‘digital transformation’.

As a pair of phrases alone they’re pretty vague, but some of the partners speaking at the event help to illustrate what Aruba means.

Take Deloitte, with its sci-fi-esque, totally connected office space; Gatwick and its ‘future-proof’ airport transformation; and the Ryder Cup using Aruba to support 200,000 spectators with Wi-Fi infrastructure and a network ca[able of delivering the 'perfect connected green'.

Cofounder and president of Aruba Networks (nee ‘an HPE company’) Keerti Melkote explained to Computerworld UK that he and his business are feeling bullish about further expansion in key markets, three years after 2015’s $3 billion buy-out/mega-merger between Aruba and HPE’s networking division.

“We’re getting the most momentum right now in the large enterprises around digital transformation, and the mid-sized enterprise around cloud enabling infrastructure,” says Melkote in the press room of the Solaris resort, which is totally kitted out with Aruba equipment and software.

“That’s where we’re focusing. We are definitely feeling very bullish about this mobile-first transformation that customers are embracing… a lot of it is through the use of Skype for Business-type tools on a mobile device. A lot of growth is coming from that." Reflecting this, Aruba's slogan for the event this week was being "a mobile legend".

“The second piece is that it’s doing really well in our security portfolio, especially Clearpass – because security has become top of mind, while people are doing wireless they’re also enabling the security piece.”

Another message that seemed to be stressed over the last three days was that Aruba understands that the landscape now is thoroughly multi-vendor, with no signs of changing. Gone are the days, realistically, when vendors would be able to push for their biggest clients to take the one-stop-shop route for all of their hardware and software needs. The gist is all the vendors need to accept this and continue to collaborate on things like open standards.

“Most customers are not end-to-end, most customers are mixed,” says Melkote. “I don’t think any customer is a single vendor customer – the challenge typically is: how do you put it all together and make it work well for the customer? That’s the world we live in and we optimise our solutions to live in that world.”

So, what have been the benefits and challenges three years on since the big HPE buy-out? One obvious benefit is the ability to scale up with a significant expansion of its go-to market geographies than when it was Aruba alone. Another is a fuller portfolio, with both wired and wireless products or services under the same umbrella.

The “most significant challenges,” Melkote says, have been about backend integration with HPE.

“We had more advanced systems as Aruba and HP, because of its historical legacy of 45-50 years, the systems were not as advanced,” he adds. “There is a program now in place called HP Next which is about modernising the IT backend systems and so-on – so we’re hoping in the next couple of years this will help us.

“This is more about our own internal IT systems, so taking orders from customers and so on – it’s really not as good as it can be so we are improving that.”

The next area of focus for Aruba will be in networking ‘as a service’ and networking ‘as a platform’. The former is a value-proposition for customers where “instead of treating it as a utility that’s transporting packets from one point to another, there is value intrinsic to it in terms of creating digital experiences.”

Networking ‘as a service’ on the other hand will be “more of a consumption model”, where customers rent or lease networking rather than buying the physical boxes. Aruba plans to bring in HP Financial Services to offer that as a service model.

“We will have all the software assets delivered as a service much like any other SaaS vendor does – but even the hardware can be consumed or rented or leased. So it’s customers going to an Opex model rather than a Capex.”

He adds that he thinks this business will “increasingly be substantial” particularly in the next three to five years.