Who is the new Google Cloud CEO Thomas Kurian?

Google Cloud CEO Diane Greene has made a shock resignation, with former Oracle executive Thomas Kurian stepping in later this month, so who is he and what does he bring to the vendor? 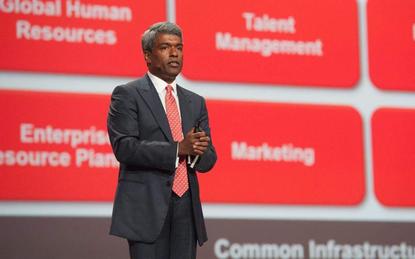 Diane Greene's tenure as the CEO of Alphabet's Google Cloud division is coming to a close this year as she announced her departure in a blog post last week.

Greene will continue in her role until January and will retain a seat on the Alphabet board.

The VMware cofounder wrote that she had originally told her friends and family that she only intended to perform the role for two years and now, after nearly three, is quitting to focus on mentoring and supporting female business leaders with engineering or science backgrounds, like herself.

She will be replaced later this month by Oracle veteran Thomas Kurian, who most recently was in charge of cloud product development for the database giant, as it looks to transition customers to the cloud and keep pace with the likes of AWS and Microsoft Azure.

"Thomas Kurian, a respected technologist and executive, will be joining Google Cloud on November 26th and transitioning into the Google Cloud leadership role in early 2019," she wrote.

"Sundar, Urs and I all interviewed Thomas, and I believe that he’ll do an amazing job helping to take Google Cloud to the next level."

Who is Thomas Kurian?

Thomas Kurian was born in India in the 1960s and moved to the US in 1986 to attend Princeton University with his twin brother George, who is now the CEO of Silicon Valley storage company NetApp.

He has a degree in electrical engineering and computer science, and an MBA from Stanford in business administration and management.

Kurian joined Oracle 22 years ago before working his way up the ranks to most recently hold the role of president.

He quit that role in September, with Bloomberg reporting that he had recently fallen out with Oracle founder Larry Ellison over "whether Oracle should make more of its software available to run on cloud computing from chief rivals Amazon.com and Microsoft as a way to diversify from its own struggling infrastructure."

Oracle changed the way it reports its cloud revenues in June, with many speculating that this meant the vendor was struggling to keep pace with its biggest cloud rivals.

Where it used to report two cloud revenue segments - software-as-a-service (SaaS) as one and then a combined figure for platform-as-a-service (PaaS) and infrastructure-as-a-service (IaaS) as another, smaller, figure - now it is reporting just one figure: cloud services and licence support.

What must he do?

Now at Google Cloud, Kurian will be responsible for clawing back market share from the cloud leaders AWS, Microsoft and IBM, something he wasn't able to do at Oracle.

This will boil down to his ability to position Google as a serious enterprise player and entice large companies to run on Google cloud infrastructure, a goal his enterprise experience and industry contacts should put him in a strong position to do.

"We're really excited to welcome Thomas whose product vision, customer focus, and deep expertise will be a huge asset to our growing Cloud business," Google CEO Sundar Pichai added in a statement.

Google Cloud still lags behind the cloud market leaders, but has been able to tell some big success stories under Greene's leadership, including a whole company migration by Spotify and a US$5 billion, five-year commitment from social media company Snapchat.

Ray Wang, founder and principal analyst at Constellation Research - who once worked alongside Kurian at Oracle - told Computerworld UK that the executive is a systematic leader and as such his first job will be to "sit down with a clean sheet of paper and look at the problem".

Wang believes that although Greene made good strides to make Google Cloud a more enterprise-friendly proposition in the public cloud "it wasn't enough," he said.

"Enterprise customers need a different level of care, and Google hasn't been able to deliver to date.

"So the resources available to Diane may not have always been allocated in the right place, but the resource is there and he has to sit down and see what partners and customer are saying."

In her blog post, Greene highlighted some of these personal achievements, including the establishment of "a training and professional services organisation and partnering organisations. We revamped customer engineering and added a team of experts in the Office of the CTO," she wrote.

Greene was also heavily focused on making Google's much-touted machine learning capabilities and engineering breakthroughs available to customers as a key differentiator, so it will be interesting to see if Kurian maintains this course or looks to go down a more traditional, top-down enterprise sales route by focusing on helping large customers transition to the cloud and easing their scalability, security, cost and existing vendor lock-in concerns.

This might take the form of a growth of the sales or go-to-market teams at Google Cloud, but essentially "enterprises need consistency and roadmaps to adjust as they go," Wang said, and Google Cloud needs to do better at delivering that if it wants to take a bigger chunk of the public cloud market over the crucial coming years.

"Google has the opportunity, but the window is closing, so there is 18 months to two years to right the ship," he said.

In Kurian, Google clearly thinks it has the right person to transition them in that direction.