Challenges constitutionality of US government ban 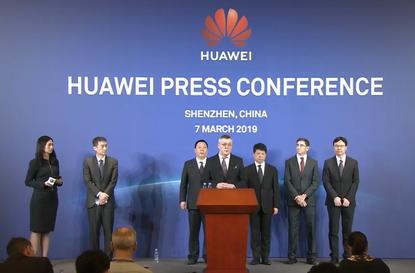 Huawei will challenge the constitutionality of a law being used to prevent it from providing 5G equipment to US telecommunications carriers through a ban on government use of its products and services.

The Chinese company said it would seek to upend adecision made under Section 889 of the 2019 National Defense Authorization Act (NDAA), which bans US government agencies from purchasing equipment and services from it.

Huawei, which is the world’s largest manufacturer of telecommunication equipment, said that the NDAA also prevents US government agencies from awarding contracts or grants to, or offering loans to, third parties that purchase equipment or services from it.

The company argues that the law violates Bill of Attainder Clause and the Due Process Clause as well as the separation of powers principles in the US constitution.

“The US Congress has repeatedly failed to produce any evidence to support its restrictions on Huawei products,” said Huawei rotating chairperson Guo Ping in remarks prepared for a press conference today.

“After exhausting all other means to allay the doubts of some US lawmakers, we are left with no choice but to challenge the law in court. This ban not only is unlawful, but also harms both Huawei and US consumers.”

Last year, the Australian government banned Huawei and another Chinese firm, ZTE, from participating in the local rollout of 5G networks.

The government in August said that it had issued a direction to telcos after undertaking “an extensive review of the national security risks to 5G networks”.

Canberra said it had told telcos that they should avoid the “involvement of vendors who are likely to be subject to extrajudicial directions from a foreign government that conflict with Australian law” or they may risk failure to “adequately protect a 5G network from unauthorised access or interference”.

Huawei had indicated it only intended to provide equipment for the radio access network (RAN) portion of Australian 5G networks, not telcos’ core networks. However, the government said advice provided to it was that 5G would blur the boundaries between edge and core introducing “new challenges for carriers trying to maintain their customers’ security, as sensitive functions move outside of the highly protected core environment”.

“This new architecture provides a way to circumvent traditional security controls by exploiting equipment in the edge of the network – exploitation which may affect overall network integrity and availability, as well as the confidentiality of customer data,” a statement released by the government at the time said.

Telco TPG has cited the government’s Huawei ban as the driver for its decision in January to halt the rollout of a mobile network. Vodafone has also criticised the ban.

The Australian and US governments are not alone in their push to exclude Huawei.

In November, New Zealand telco Spark revealed that it had been given government advice to shy away from using the company’s 5G equipment.

In the UK, Huawei may be permitted to have a limited role in the rollout of 5G. The company has also been challenged in France, Germany and Canada.

“For three decades, we have maintained a solid track record in cyber security. Huawei has not and will never implant backdoors. We will never allow others to install any in our equipment,” Guo Ping said today.

“The US government has long branded Huawei a threat. It has hacked our servers and stolen our emails and source code. Despite this, the US government has never provided any evidence supporting their accusations that Huawei poses a cyber security threat.”

“Still, the U.S. Government is sparing no effort to smear the company and mislead the public about Huawei. Even worse, the US government is trying to block us from the 5G markets in other countries,” he added.

The company’s lawsuit was filed in the US District Court for the Eastern District of Texas.

“While courts do not have the authority to protect the people from all the ill-advised aspects of the NDAA, they do have the duty to protect Huawei and others from its unconstitutional aspects—including its specific targeting of Huawei for punishment, its deprivation of Huawei’s liberty without a fair and impartial hearing, and its usurpation of the charging and adjudicative powers reserved by the Constitution to the executive and judicial branches,” the complaint filed by Huawei states.

“Plaintiffs respectfully request that the Court declare unconstitutional and enjoin enforcement of those discrete aspects of section 889 that violate the Constitution, while leaving all other aspects of the NDAA, and the remainder of section 889 itself, intact.”