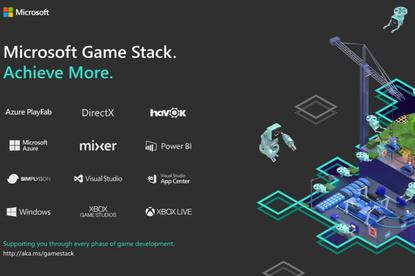 Microsoft has brought its services for game developers under a single umbrella, dubbed Microsoft Game Stack, and launched a range of new gaming-focused Azure services.

Kareem Choudhry, corporate vice president, cloud gaming, told a media briefing ahead of today’s announcement that Microsoft can offer “end to end” support for game development but historically the company’s offerings for devs have been “buried and lived in pockets all across Microsoft”.

“Developers don’t really have a lot of time to go searching for tools and we know it’s been hard to navigate and take full advantage of everything that we have to offer,” Choudhry said.

That’s why the company’s “starting a journey” to bring the relevant products, platforms and services together as Microsoft Game Stack, he said.

“Game devs need tools and services to support them through the entire lifecycle of game development from creating a game, which involves designing, building, testing and publishing, to operating your game where you monetise, measure, engage and grow your user base,” Choudhry said.

Although Microsoft is pushing its Azure services, Game Stack is “cloud, network and device agnostic – whatever game developers choose, regardless of where they want to create their content for their customers,” Choudhry told the briefing.

“Part of our philosophy with Game Stack is that it’s a complete ecosystem for game developers of platforms, tools and services under one umbrella that supports every stage of game development,” he said. “But the other thing that is important to us is choice – game developers are free to use as much or as little as they want out of Game Stack.”

However, Microsoft has seen an “opportunity to build out Azure with specific cloud services focused on creating and operating games,” he said. That was a key motivation for the company’s acquisition of PlayFab, which Microsoft announced in late January 2018. PlayFab provides cloud-based backend services for ‘live’ games across a range of platforms.

At the time of the acquisition PlayFab co-founder James Gwertzman said the company’s “platform of scalable game services, game analytics, and LiveOps tools” was helping power more than 1200 live games and had served more than 700 million plays.

Microsoft also revealed it would extend Xbox Live to the iOS and Android mobile platforms.