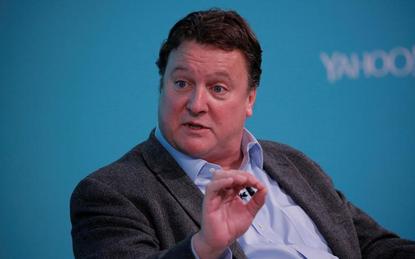 Clark's shock departure on Thursday came along with a gloomy set of quarterly results that fell short of expectations on revenue and a warning on profit, triggering a 15 percent slump in the company's shares and erasing more than US$2 billion in market cap.

At least six brokerages cut their price targets on the stock, which is on track to give up most of its gains this year.

"Investors were desperately hoping to see some stabilization for the current quarter, but what they got instead was a number of negative surprises in the form the company's CEO heading out and its struggles to grow sales," Investing.com analyst Haris Anwar said.

"These developments signal Symantec has both internal and external challenges to overcome ... let alone grow its market share."

Richard Hill, who joined the company's board as a nominee of hedge fund Starboard, will become interim CEO. While Symantec did not say why Clark, CEO since 2016, left the company, Hill said Clark wanted to take care of his ailing father.

"We believe Symantec is looking toward fiscal 2020 as a fresh start with new management, but the company will be challenged to make up for lost ground in the enterprise space," Morningstar analyst Mark Cash said.

Starboard disclosed a 5.8% stake in the company in August and demanded the appointment of five directors to its board before finally settling for three.

Hill has been a board member of several companies as a Starboard nominee and led the turnaround of Marvell Technology Group Ltd. Marvell's shares have more than doubled since Starboard took a stake in 2016.

Hill, who was quite vocal on the conference call with analysts, said he was the ideal candidate for the job after turning around Marvell. "If I feel disappointment in the numbers and I think it is bad, I will tell you that and what we are going to do to fix it."

Jefferies analyst John DiFucci said while Hill did not seem to have detailed plans for the company on the call, he seemed very enthusiastic.

Clark did not attend the conference call.

(Reporting by Supantha Mukherjee and Vibhuti Sharma in Bengaluru; editing by Patrick Graham and Anil D'Silva)