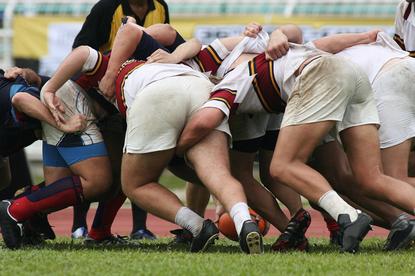 The Rugby World Cup is underway and while fans absorb the drama of 20 countries competing for the sport's biggest prize many of the game's insiders will be monitoring the growing issue of concussion management.

In a recent review of head injuries in elite level football, rugby, ice hockey and American Football, men’s rugby had the highest incidence of concussion in both match play and practice.

Around 20 per cent of injuries in professional games are concussion-related, leading some parents to bar their children from playing the sport.

SAP has teamed up with Sports & Wellbeing Analytics (SWA) and Keytree to reduce the concussion risks that threaten the future of the sport by developing the Protect platform, an IoT-enabled gumshield that provides real-time insights into the head impacts experienced by athletes on the pitch.

The Protecht system anaylses each contact through a gumshield equipped with an accelerometor that measures the G-force of every impact. Coaches can use the instant feedback to influence in-game decisions and analyse the insights against historical data to guide their training choices for each player.

The system is already being used to assess head impacts by the Ospreys, a professional rugby union club whose four Pro14 championships is more than any other Welsh team has won.

"It enables us to not only create a library of our data across how many impacts we get within a game and the margin of what those impacts are, but also individualise what players are susceptible to during a game in different positions, scrums, line-outs, rucks and mauls, and whether a player is running with the ball or making tackles," Simon Church, Ospreys RFC Head of Physical Performance, told Computerworld.

Some of these incidents, such as a knee hitting a head during a ruck, would often go unseen by the human eye. The gum shields can make these visible in data that provides insights into player welfare and helps teams assess how many contacts a player can safely receive during training and matches.

"You're managing collision load during the week, with an expectation that the players will deliver at close to 100 percent at the weekend," added Ospreys RFC head coach Allen Clarke. "This allows us to be accurate in terms of our training volumes."

SWA developed the gumshield with hardware and software designed by Keytree that is integrated with the SAP Hana data platform to analyse the impacts.

They provide linear and rotational data on how fast the head accelerates in every direction to understand the impact, which can be integrated with running information measured through GPS systems and other factors such as sleeping patterns to create a holistic view of a player's health and performance.

Ospreys use this data to modify the running and contact levels in training drills and maximise the benefits of every session while minimising the risks.

"This does not predict concussion and it can't prevent it, but it can help you understand what impacts are going on in the player at a particular point in time. And do something about it," said SWA CEO Chris Turner.

The gumshields are custom fit for every player, which has helped it gain support from elite athletes such as James Hook, an Ospreys player who is Wales' fourth highest all-time points scorer. Hook personally benefitted from the system last season when it showed him the impact of a collision that forced him to leave the pitch.

"Most players wear gum shields these days so they're more than comfortable wearing them," he said. "All it's got is that little chip inside, which whilst it's in your mouth you don't notice anyways."

The system could also be applied to any other sport with head impacts, from boxing to football.

It is already improving safety and performance on the rugby pitch and Ospreys head coach Clarke is also enthusiastic about the potential long-term benefits. He believes it could help turn today's fans of the Rugby World Cup into the sport's stars of tomorrow.

"We want people to play rugby and for rugby to be a safe sport," he said. "If we can minimise the effects of rugby on the brain we'll be in a better place and the growth of the game worldwide will increase."