Steve Ballmer at CES: Can he solve Microsoft's tablet problem? 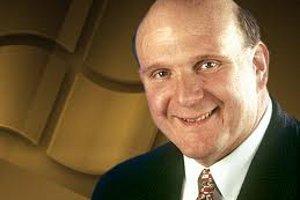 Judging by typical performances, Ballmer will touch on a variety of technologies planned by Microsoft, and use the words "blah blah blah" as a transition from one topic to the next.

If nothing else, it will be entertaining, but this could also be a crucial speech for the CEO who's led the behemoth Microsoft for more than a decade. The dominance of Windows is under threat, not necessarily by Mac or Linux, but by Apple's iPad and new tablets based upon Google's Android operating system.

Microsoft could take the Windows 7 (or 8?) desktop operating system or Windows Phone 7 and adapt them to the tablet form factor, or announce something completely new. No matter what Microsoft does, the key is the user interface, Dulaney says. (See also: 8 amazing things you'll do with Windows 8.)

Aberdeen Group research analyst Andrew Borg says Ballmer "would be a fool not to" discuss tablets at his CES keynote. "The deck is stacked with a difficult hand for Microsoft," Borg says. Windows 7 is not optimized for multi-touch screens and Windows Phone 7 is far from being the most advanced smartphone OS on the market today, he notes. Ideally, Ballmer will address Microsoft's limitations in the tablet market and provide a compelling road map for overcoming them, Borg says.

While Windows-based tablets from Fujitsu already exist and work well in some vertical markets, such as the healthcare industry, the user interface isn't simple enough to challenge the iPad, Dulaney says. The Windows "Start" button isn't exactly going to excite most tablet buyers.

"The problem for Microsoft has been their user interface," Dulaney said. "We tolerate it on PCs and laptops but on tablets and smartphones it just doesn't work."

There are roadblocks for Microsoft in seemingly every path to the tablet market. The name "Windows Phone 7" seems to limit the new OS to phones, of course, and it might have trouble scaling up to the tablet form factor. Although there is a lot of excitement about Android in the tablet market, apps built for Android phones often don't use the whole screen on Android tablets, and Windows Phone 7 could face similar scaling problems, Dulaney says.

If Microsoft doesn't get it right, it risks not luring in enough users and developers to create a thriving ecosystem. "The question is, do they take it to the next level? Do they compete with Apple?" Dulaney says.

Gartner hasn't released tablet sales figures comparing the iPad to Android and Windows, but the analyst firm projects worldwide tablet sales to reach 54.8 million units in 2011. And it says that sales in 2010 were driven largely by Apple's iPad. Android tablets are having some early success, and a new version of the Android operating system expected in the summer will make it work better on tablets.

While Microsoft still dominates the PC market, the rise of these new computing form factors is threatening Microsoft's grip on the technology world.

Microsoft still captures over 90 per cent of the operating system market share, even when including Apple's iPhone and iPad operating system and Android, according to data from Net Applications. But that share has steadily dropped and could dip below 90 per cent this year, perhaps even during the first quarter.

That doesn't mean Windows usage is dropping. It just means consumers are choosing additional form factors and accessing the Web across a wider variety of devices. In general, the new devices are not running Windows.

"While we report usage in percentage of usage instead of actual numbers of users, I have no doubt that the number of Windows users has grown significantly over 2010, and am equally confident in growth in the number of users of Mac OS in 2010," says Vince Vizzaccaro, vice president of marketing for Net Applications. "What we're seeing is faster growth in mobile and tablet usage. I don't think Windows Phone 7 has been on the market long enough yet to help Microsoft on the mobile front, but I do believe Microsoft recognizes how important the mobile arena is, and is focused on being successful there."